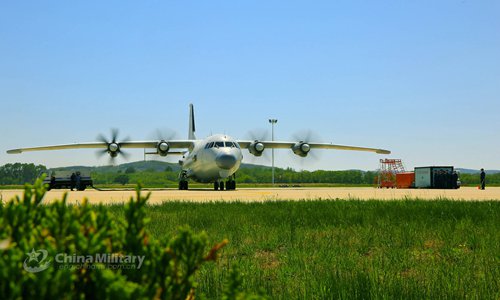 A Y-8 reconnaissance aircraft attached to an aviation regiment of the North China Sea Fleet under the PLA Navy taxies on the runway in preparation for takeoff during a flight training exercise in northeastern China's Liaodong Peninsula on May 21, 2018. (Photo:eng.chinamil.com.cn)

While the reports did not elaborate, the Y-8 aircraft in question was not likely the basic transport version, but a special mission version, possibly an intelligence reconnaissance or patrol variant, a Chinese mainland military expert who asked not to be named told the Global Times on Friday.

These types of Y-8 aircraft could update the PLA on the current situation on the island after recent, repeated military movements around it, the expert said.

Taiwan test-launched multiple unknown types of missiles which analysts said could be air defense missiles on Thursday evening, Taiwan media reported. The US destroyer USS Rafael Peralta was also spotted to the north of Taiwan in the past few days.

Chinese mainland experts noted that the Taiwan missiles are not technologically advanced and cannot change the overwhelming advantage the PLA has over the island.

On Tuesday, a US C-40 military transport aircraft made a flyover along the west coastline of Taiwan, and a group of Su-30 fighter jets of the PLA briefly entered the southwestern "airspace" of Taiwan island at the same time, a move widely interpreted as a counter by the Chinese mainland to provocative US action.

All necessary measures will be taken to safeguard national sovereignty, security and development interests, said Hua Chunying, a Chinese Foreign Ministry spokesperson, at a regular press conference on Thursday.