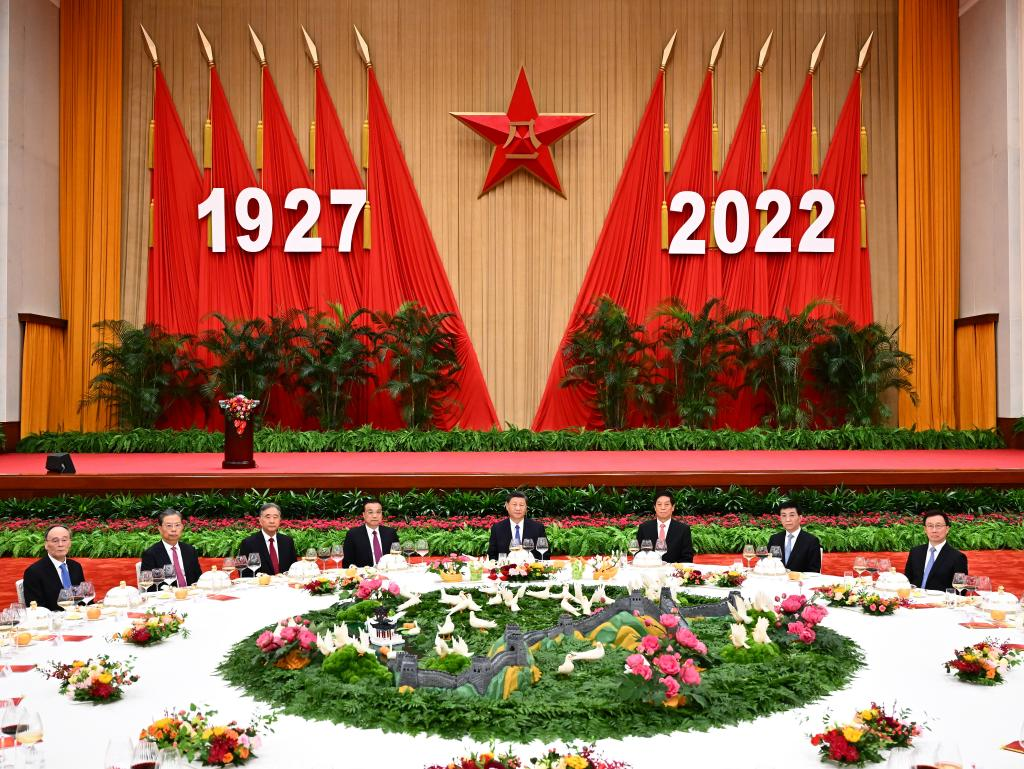 Chinese President Xi Jinping, also general secretary of the Communist Party of China Central Committee and chairman of the Central Military Commission, and other senior leaders of the Party and the state, including Li Keqiang, Li Zhanshu, Wang Yang, Wang Huning, Zhao Leji, Han Zheng and Wang Qishan, attend a reception held by the Ministry of National Defense to celebrate the 95th founding anniversary of the People's Liberation Army (PLA) at the Great Hall of the People in Beijing, capital of China, July 31, 2022. (Photo: Xinhua)

Five years ago, at the commemoration of the PLA's 90th founding anniversary, Chinese President Xi Jinping, also general secretary of the Communist Party of China (CPC) Central Committee and chairman of the Central Military Commission (CMC), stated in his speech that China is closer than ever before in history to achieving the goal of the great rejuvenation of the Chinese nation, and needs to build a powerful military more than ever.

This is coherent with the remarks he made not long after he took office as the general secretary of the CPC Central Committee in 2012.

When visiting the exhibition "The Road to Rejuvenation," Xi emphasized that national rejuvenation has been the greatest dream of the Chinese people since modern times began.

Ten days later, during an inspection to the armed forces, Xi said, "This great dream we have is to make our country strong. To the military, the dream is to make our forces strong."

Leading the entire military in theoretical exploration and practice, Xi answered major questions including the tasks, targets, principles, strategies and approaches for building a strong military in the new era, thus forming Xi Jinping's thinking on strengthening the armed forces.

The thinking was included in the CPC Party Constitution at the 19th CPC National Congress, thus establishing its guiding position in the development of China's national defense and armed forces.

According to the report to the 19th CPC National Congress and the Resolution of the CPC Central Committee on the Major Achievements and Historical Experience of the Party over the Past Century, the Party's goal of building a strong military in the new era is building the people's forces into a world-class military that obeys the Party's command, can fight and win, and maintains excellent conduct.

With their eyes on achieving the centenary objectives of the PLA by 2027 and the goal of fully transforming the armed forces into world-class forces by the mid-21st century, the people's armed forces have taken vigorous measures to implement Xi's decisions and instructions.

To address the severe political risk China's armed forces faced in the period before the 18th CPC National Congress, Xi worked vigorously to govern the military with strict discipline in every respect.

Proactive measures were adopted to improve Party conduct, ensure integrity, and fight corruption in the military so that the proud traditions and fine conduct of the Party and the military can be restored and carried forward.

At the 19th CPC National Congress, the revised Party Constitution affirmed that the chairperson of the CMC assumes overall responsibility over the work of the commission, further enhancing the fundamental system of the Party's absolute leadership over the military.

The entire armed forces stay in line with the CPC Central Committee, the CMC and Xi ideologically, politically, and in action, and remain absolutely loyal, pure and reliable.

Apart from solidifying its political foundation, the development of China's armed forces is also empowered by vigorous reform and technological advancement.

At the third plenary session of the 18th CPC National Congress, the reform of national defense and the armed forces was included in the overall planning of deepening reform across the board in accordance with Xi's proposition.

Following the reform, the military framework was restructured so that the CMC assumes overall management over military affairs, theater commands focus efforts on military operations, and services are responsible for enhancing their own military strength, so as to realize a complete remodeling of the organizational structure of the people's army. Thus, the people's army is renewed in terms of its system, structure, setup, and appearance.

The Chinese armed forces in recent years are also equipped with new gears such as J-20 stealth fighter jets and main battlefield 99A tanks.

Since the 18th National Congress of the CPC, Xi has reiterated the key task of building strong military forces that can fight to win. The key task is a linchpin of deepening national defense and military reform.

"The people's army will firmly uphold CPC leadership and our country's socialist system, safeguard our national sovereignty, security and development interests, and uphold regional and world peace," Xi once said.

Faithfully accomplishing its missions, China's armed forces have proved to be a staunch force in maintaining world peace.

Chinese peacekeepers were dispatched to different parts of the world, including South Sudan, Lebanon, and Djibouti, where they shoulder their responsibilities of safeguarding world peace, with soldiers like Shen Liangliang, Li Lei and Yang Shupeng sacrificing their lives in the line of duty.

In addition, the peaceful Chinese armed forces have actively participated in the global fight against the COVID-19 pandemic, joint exercises, trainings and competitions, and have undertaken humanitarian assistance missions, honoring its commitment to upholding and acting on true multilateralism while actively contributing to building a community with a shared future for humanity.

"China will always, as ever before, be a promoter of world peace, contributor to global development, and upholder of the international order, and hence the Chinese army will always be a staunch force in keeping world peace," Xi said.

Under the strong leadership of Xi, the people's armed forces are following the Chinese path of military development with resolve, and forging ahead in pursuit of building a world-class army. They are sure to provide strong strategical support for achieving the rejuvenation of the Chinese nation.