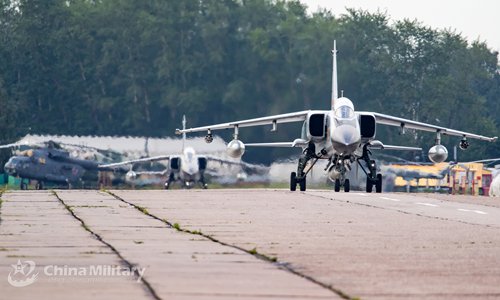 A JH-7A fighter bomber attached to the Chinese PLA Air Force taxies on runway after landing at the airport on July 20. All aircraft of the PLA Air Force to participate in the "Aviadarts-2018" international competition of the International Army Games 2018 have arrived at the Dyagilevo military airport in Ryazan Oblast, Russia, on July 21, 2018. (Photo: Global Times)

Teams from the Chinese People's Liberation Army (PLA) are preparing for the upcoming International Army Games (IAG) scheduled to start on August 3 across 10 countries, which this year will include a joint team from the PLA's Naval Aviation and Air Force for the first time.

A PLA Naval Aviation brigade is currently conducting intensive training for the "Aviadarts" competition to be held in Russia as a part of the IAG.

"This will be the first time the Naval Aviation troops step out of the country's border for the IAG, and we value this opportunity," naval officer Feng Xianzheng told CCTV.

The increasing presence of Chinese naval units in the IAG is an indication that the Navy is becoming more confident in foreign communication and exchange, Wei Dongxu, a Beijing-based military analyst, told the Global Times on Monday.

Having Naval Aviation's fighter bombers involved will help Chinese Navy pilots gain more experience from their foreign colleagues, especially from Russians who have been in combat, Wei said.

Other teams, including engineering troops of the Army and paratroopers of the Air Force, are also conducting exercises for various competitions in the games.

The Chinese military has taken part in the IAG six years in a row and hosted certain competitions in China for three consecutive years, the PLA Daily reported.