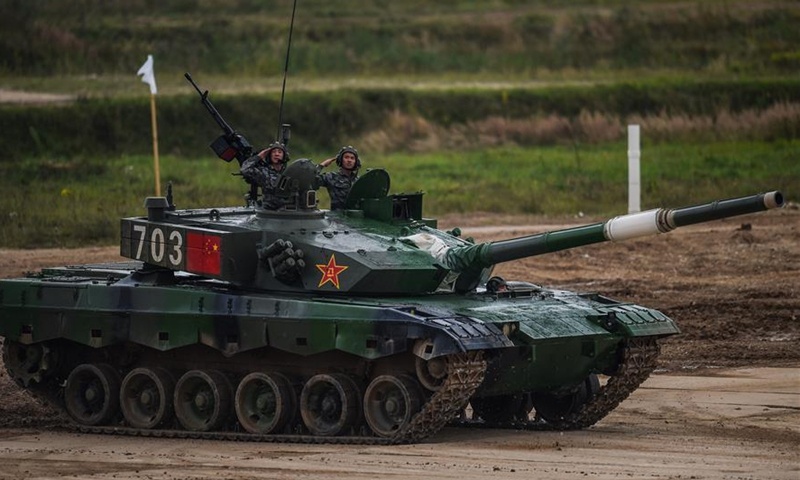 Chinese team takes part in the tank biathlon's singles during the International Army Games 2020 in a suburb of Moscow, Russia, Aug. 30, 2020. (Xinhua/Tian Dingyu)

China will participate in the Kavkaz-2020 strategic military drills to be held later this month in Russia, with troops attached to the Chinese People's Liberation Army (PLA) Western Theater Command joining militaries from Russia and other participating countries in elimination, joint strike and battlefield control exercises, the Chinese Defense Ministry announced on Thursday.

The PLA's participation in the drills highlights the military ties between China and Russia, Chinese experts said on Thursday, as China has had frequent interactions with the Russian military in recent years, including in multiple large-scale drills, a joint strategic bomber patrol, and Russian military parades.

India, which also has close military ties with Russia, has withdrawn from the upcoming drills amid border tensions with China, a move that showed its childishness, experts said.

According to the consensus reached by China and Russia, the Chinese military will send troops to Russia's Astrakhan Region and participate in the Kavkaz-2020 strategic military drills from September 21 to 26, said a statement released by China's Ministry of National Defense on Thursday.

The Chinese forces will mainly consist of troops from the PLA Western Theater Command, which will carry wheeled equipment and light arms and arrive in Russia via China's latest transport aircraft, the Defense Ministry said.

At a crucial time when the whole world is fighting the COVID-19 pandemic together, China's participation in the Russian drills aims to further develop the two countries' comprehensive strategic partnership of coordination for a new era, deepen the pragmatic cooperation in the two militaries' training, and boost the capability of the participating countries' troops in jointly dealing with security threats and safeguarding regional peace and stability, the Chinese Defense Ministry said.

The Kavkaz-2020 will be Russia's largest training event this year, the Xinhua News Agency reported on Tuesday, citing the Russian Defense Ministry.

Beijing-based military expert Li Jie told the Global Times on Thursday that China's participation in the Russian drills will highlight not only diplomatic, but also strategic cooperation between the two countries.

China and Russia have had several military interactions in various forms in recent years including various drills and the International Army Games organized by Russia, Li said, noting that the two countries will continue to enhance their strategic military cooperation.

China has joined Russia's large-scale strategic drills, the Tsentr-2019 and Vostok-2018, in the past two years. In July 2019, China and Russia conducted their first joint strategic patrol in Northeast Asia, with the Chinese side dispatching two H-6K bombers and the Russian side dispatching two Tu-95 bombers. In November and December 2019, the two countries also conducted naval drills in South Africa and the Gulf of Oman with South Africa and Iran respectively. In June, PLA honor guards participated in Russia's Victory Day military parade in Moscow's Red Square.

India has decided not to take part in the Kavkaz-2020 drills due to "COVID-19 and consequent difficulties in the exercise," Indian news outlet NDTV reported on August 30.

Quoting sources in the Indian Defense Ministry, India's news agency ANI said China's participation was a reason India had pulled out of the Russian drills amid border tensions.

Li said that India showed its childishness in quitting because of China, and that it feared China's presence could eclipse its role, adding that India is narrow-minded and always seeks to prevail over others.

The Kavkaz-2020 drills are not aimed at any third party, and are not related to the regional situation, according to the Chinese Defense Ministry statement.