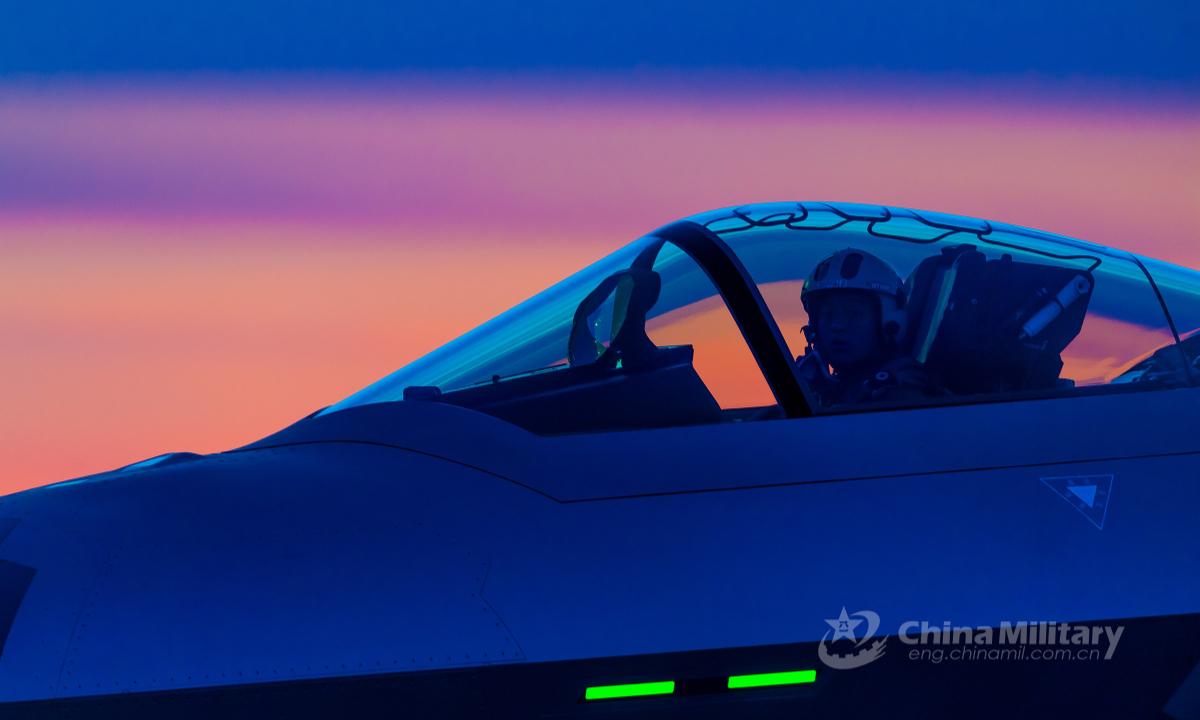 A J-20 fighter jet pilot assigned to a PLA air force base contacts with the control tower in the cockpit after landing safely on the runway during an air combat training exercise involving multi-type fighter jets on May 17, 2022. (eng.chinamil.com.cn/Photo by Yang Jun)

The Chinese People's Liberation Army (PLA) Air Force and Naval Aviation Force have recently made new progress in their new pilot recruitment and training programs at a time when China is expanding its warplane fleet with record-breaking warplane production capability, with analysts saying on Sunday that the PLA will make sure to have enough qualified personnel to fly its cutting-edge machines.

In 2020, the Shijiazhuang Flight Academy for the first time received delivery of J-10 fighter jets and started testing with this new training program. While it takes four to six years of flight training for a pilot cadet to become qualified to fly a fourth generation fighter jet under the old training program, the new program takes only three years, greatly shortening the time needed to train a cadet to become a combat-ready pilot, CCTV reported.

With an average age of 23, this first group of pilot cadets in the new program was selected from pilot cadets who trained with CJ-6 basic trainer aircraft at the Aviation University of Air Force. After completing training on JL-10 advanced trainer jets, they switched to train on J-10s in July last year and completed high-standard, realistic training including air-to-air mock combat against instructors and mock air-to-ground combat against air defense troops of the PLA Army, the CCTV report said.

"This group of pilot cadets will become an important force in air combat, which has key significance in the promotion of the Air Force's strategic transformation and its carrying out of duties and missions in the new era," Xie Hao, a brigade commander at the Shijiazhuang Flight Academy, told CCTV.

The PLA Navy recently also wrapped up its annual pilot cadet recruitment program for shipborne aircraft, according to a video released by the PLA Navy's official Weibo account on Friday.

The other shipborne pilot cadets are expected to learn to fly other types of aircraft including carrier-based early warning aircraft, transport aircraft or vessel-based helicopters, observers said. They noted that with the launch of China's third aircraft carrier, the Fujian, which is also the country's first carrier equipped with electromagnetic catapults, the PLA Navy not only needs more pilots, but also pilots for more types of aircraft.

The latest progress in new pilot recruitment and training programs by both the PLA Air Force and Naval Aviation Force came at a time when China saw a warplane production capacity boost in 2021.

Combat capability is generated through a combination of operators, weapons and equipment, so only having one is not enough. That is why personnel training, weapons and equipment development must take place in tandem, a Chinese military expert who requested anonymity told the Global Times on Sunday.