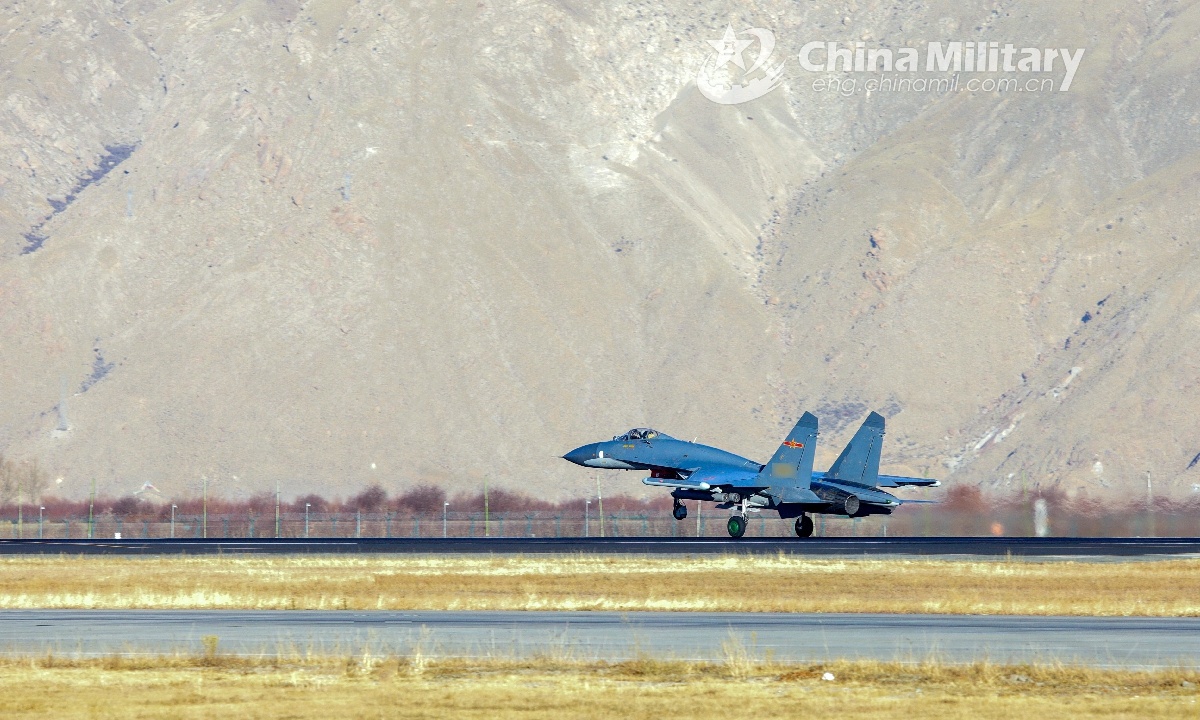 A fighter jet attached to an aviation brigade of the air force under the PLA Western Theater Command takes off from the runway for a real-combat flight training exercise. (Photo: eng.chinamil.com.cn)

Despite the severe weather conditions, the drills proceeded as planned, as multiple types of warplanes took off and practiced tactical maneuvers in the air, PLA Air Force Online said.

A J-11 fighter jet and a Y-8 transport aircraft were among those featured in the exercises, according to a video attached to the Sina Weibo post.

Fu Qianshao, a Chinese military aviation expert, told the Global Times on Wednesday that flying in sandstorms is challenging because of low visibility, particularly when conducting low-altitude maneuvers and landing, during which accidents could occur if the aircraft are not handled well.

The exercises demonstrated a high training level of the PLA pilots who have mastered techniques to handle low visibility, as well as the high performance of avionics and navigation systems on the warplanes that could effectively assist the pilots, Fu said.

Putting visibility aside, another challenge comes from the sand, analysts said.

When making contact with high-density sand in the air, aircraft parts, including engines, could malfunction, Fu said, noting that the PLA exercises also showed that its warplanes are designed to resist sandstorms.

Sandstorms also pose a significant workload for maintenance, as ground staff must clean the sand and deal with the wear and tear from them, Fu said.

"If enemies attack in sandstorms, we can defend ourselves; we can also choose to attack in this kind of extreme weather and cause trouble to the enemy," Fu said, calling this a manifestation of combat readiness.

A powerful sandstorm originating in Mongolia swept across much of northern China on Monday, creating the strongest and most extensive sandstorm in the country in a decade. Experts said it was mainly caused by natural factors but also showed the ecological environment is still fragile.