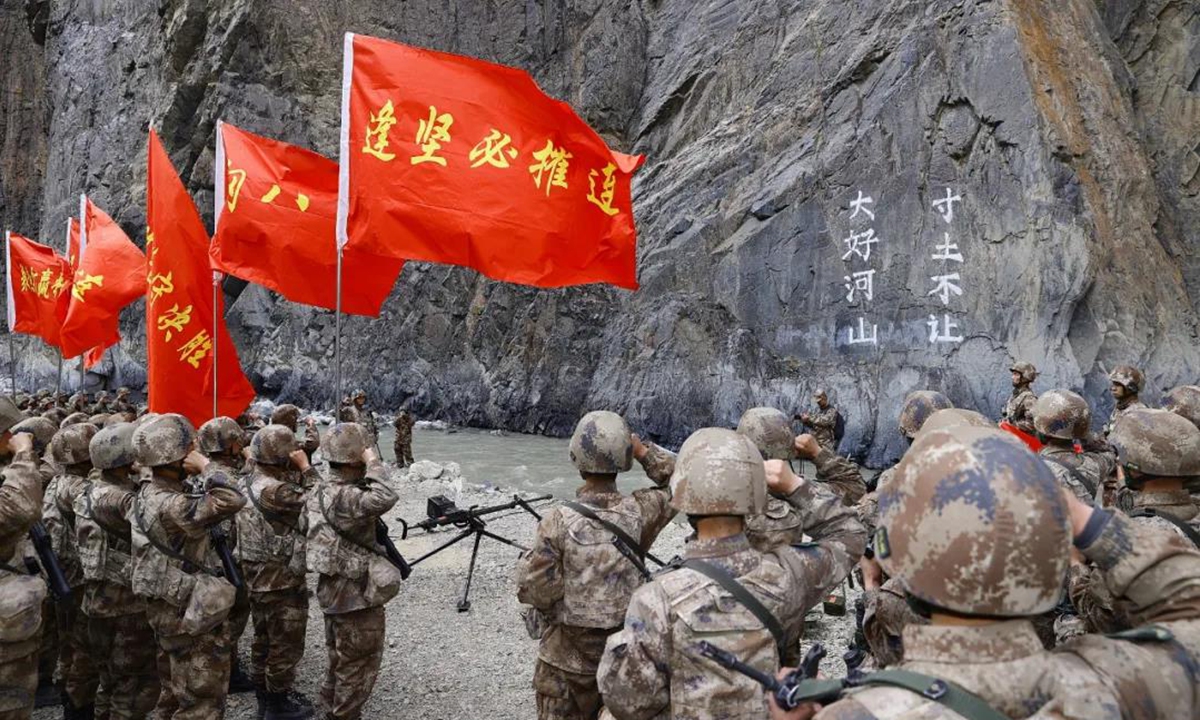 "I would rather sacrifice my life than lose one inch of my country's territory," soldiers with the Chinese People's Liberation Army (PLA) Xinjiang Military Command said after they had recently participated in activities to celebrate the 100th anniversary of the founding of the Communist Party of China (CPC).

The command recently organized troops in Xinjiang to carry out activities under the theme "We're with the Heroes" to learn how PLA heroes, including the martyrs of the Galwan Valley conflict, defended and guarded the country's borders.

The command did not reveal when those activities were held but released the information on Tuesday, the day that marked the first anniversary of the Galwan Valley clash.

The troops where the martyrs served vowed: "If war comes, I will not hesitate to rush like you to dedicate my last heartbeat to our motherland…"

Chen Hongjun, one of the four martyrs, was awarded by the Central Military Commission the title of "border-defending hero" while first-class merits were awarded to the three other martyrs - Chen Xiangrong, Xiao Siyuan and Wang Zhuoran.

The four martyrs earned deep respect across the country for their courage and bravery. Crowds visited the martyrs' hometowns, where they were buried, to pay their respects during the Tomb-sweeping Day in early April.

Ru Siping, a senior master sergeant, said when sweeping tombs for martyrs at the Shiquanhe Martyrs Cemetery, "They sacrificed for the country, were loyal to the Party and dedicated to the people, and they will always be an example for us to learn from."

A brigade from the PLA Xinjinag Military Command also went to Kangxiwa Martyrs Cemetery. Some said when they saw martyrs of similar age they felt a heavy responsibility on their shoulders, and vowed to charge forward as long as the motherland needs them.

Other brigades in the military command also inspired patriotic fervor among soldiers by organizing speech contests and seminars, and also by reviewing their oath taken while joining the CPC.

Chinese netizens also honored and expressed gratitude on social media to Chinese frontier soldiers and officers who sacrificed their lives in the deadly military clash that broke out on June 15 last year.

Some experts warned India not to attempt to provoke fresh conflicts along the border, as it would only result in unbearable consequences for India.