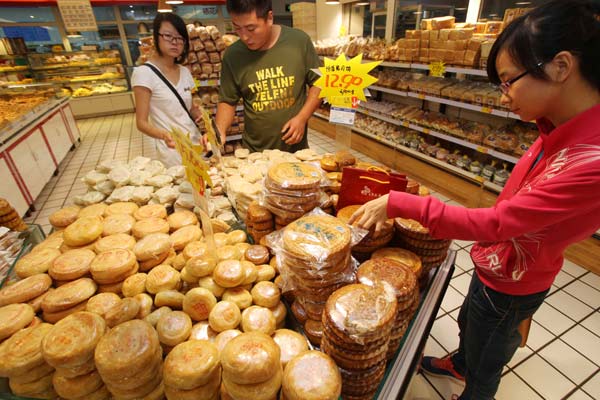 Mooncakes stuffed with artificial meat will hit the market in China for the first time in September, Chongqing Morning Post reported.

The product was developed by a lab team from the Beijing Technology and Business University and vegan meat brand Starfield.

The first batch will be put on sale in Starfield outlets in Shenzhen, South China's Guangdong province.

There are two kinds of artificial meat: One is vegan meat made mainly from bean protein, the other is real meat grown from animal stem cells.

The artificial meat stuffed in these mooncakes is plant-based, which has low environmental costs and can reduce wasting animal husbandry resources. It is also suitable for people with high blood sugar, high blood pressure or high blood fats to eat, according to the researchers.

The artificial meat aims to imitate real animal meat in five aspects: color, smell, taste, texture and sound, said Li Jian, who leads the university lab team. Many people don't understand the sound component, Li said. "When we stir-fry sliced meat or deep-fry fish, the meat will produce an appetizing crackling sound. This sound is what we want to achieve with our artificial meat, together with the other aspects," he explained.

In an online vote launched by Weibo Technology, 34.4 percent of respondents said they would like to try an artificial meat mooncake, while over 63.3 percent said they would not want to try it or would take a wait-and-see approach.

The technology of making artificial meat is more mature overseas. In China, it has yet to make much headway and is just a concept for vegetarian food, according to food industry analyst Zhu Danpeng.

Besides quality, price is also an important factor relating to the success of artificial meat in the market. The cost of producing artificial meat is not cheap at present and is even more expensive than that of ordinary meat products, said Zhu. The cost will fall as artificial meat becomes more popular, though that will take some time, he added.