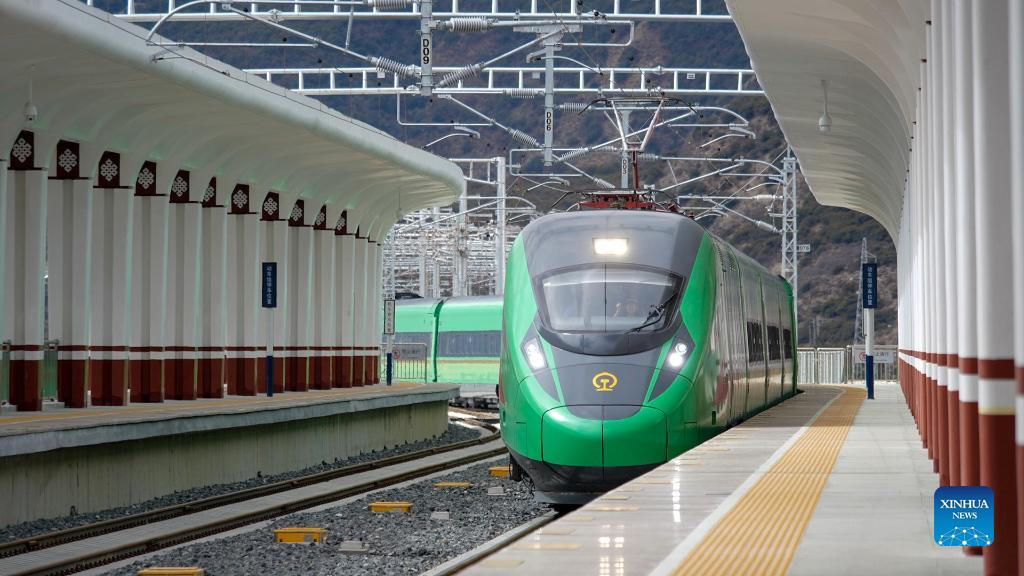 On a sunny spring day, a green Fuxing bullet train ran through the mountains along the Yarlung Zangbo River, heading for Nyingchi, a city known for its peach blossoms in southwest China's Tibet Autonomous Region.

Liu Lili didn't want to miss the peach blossom season. Working in a clothing store in the city of Xigaze, she bought a C893 train ticket from Xigaze to Nyingchi, planning to visit her sister there and enjoy the peach blossoms together with her.

"When the train passed through the Lhasa station, I thought most passengers on the carriage would get off. To my surprise, they also headed to Nyingchi to see the flowers like me," said Liu, 25.

This was the first spring since the Lhasa-Nyingchi Railway opened for operation on June 25, 2021. The first electrified railway in Tibet, with a designed train speed of 160 kph, has cut the travel time from some five hours by bus to three and a half hours.

On the platform of the Lhasa railway station, 36-year-old station worker Tashi Dondrup watched passengers board the C893 train.

Tashi Dondrup, a native of the regional capital Lhasa, had to take a plane in 2002 when he headed to school in Wuhan, capital of central China's Hubei Province, because there were no trains in Tibet. After he started working in 2006, he witnessed the development of rail transport in the plateau region.

In July 2006, the Qinghai-Tibet Railway linking Lhasa and Xining, capital of Qinghai Province, went operational, ending the pre-railways period in Tibet. In August 2014, the Lhasa-Xigaze Railway opened for operation as the first extension line of the Qinghai-Tibet Railway. In June 2021, when the Lhasa-Nyingchi Railway was put into operation, Fuxing bullet trains ran in the plateau region for the first time.

The Lhasa railway station has witnessed explosive growth in passenger flow, surging from 2.24 million in 2007 to more than 4 million in 2021.

"The original four waiting halls can no longer meet the demand. We are now renovating the station to provide another two rooms for passengers to wait for trains," Tashi Dondrup said.

Now, bullet trains have connected Lhasa, Nyingchi, Shannan and Xigaze, whose combined GDP accounts for more than 70 percent of the region's total. Railway transportation has further driven the economic growth of the cities.

Sonam Tobgye, a farmer from Changzhug Township, Nedong District in the city of Shannan, often takes the train to Lhasa to visit his daughter. His home is located at the foot of Yumbulagang, Tibet's first palace, dating back more than 2,000 years, which is a popular tourist attraction in Shannan.

The 67-year-old said the new railway not only makes travel easier, but also brings more tourists, as well as tourism revenue, to his hometown.

"Some of my fellow villagers sell souvenirs, some run tea houses and some provide horse-riding services for tourists. Their wallets have become much fatter," he said.

Near the Nyingchi railway station, Nyima Chodron operates a Tibetan restaurant with her husband. The farmer from a nearby village said their restaurant has received more customers since the operation of the Lhasa-Nyingchi Railway, with the profit reaching 100,000 yuan (about 15,746 U.S. dollars) last year.

"I believe more guests will come when the epidemic ends," she said.

Government figures show that the per capita disposable income of urban and rural residents in the city of Nyingchi reached 41,346 yuan and 21,767 yuan, respectively, in 2021, up 13.3 percent and 15.8 percent over the previous year. The number of tourists in the city exceeded 10 million, and the tourism income reached a record high of 8.3 billion yuan.

Railway figures show that the Lhasa-Nyingchi Railway has transported 977,100 passengers since its opening. Up to 40,000 tonnes of cargo has arrived in Nyingchi by train.

Local villager Penpa, 38, used to transport materials for the construction of the railway. After the railway opened, he started a logistics company, with four trucks delivering cargo, such as daily necessities, feedstuff and construction materials, from the railway station to elsewhere in the city.

"The railway freight charge is at least one-third lower than road transportation. I believe I will have more business in the future," he said.