According to a report by the Forward Industry Institute, the children's wear market in China was worth 147.4 billion yuan by 2016, an increase of almost 8 percent from the previous year.

The report predicted that with the second-child policy taking effect and the nation's consumption upgrade, the market will grow at about 5 percent annually until 2022.

The flourishing children's wear industry and a child’s star effect have given birth to a commercial chain for young models.

Adorable children can attract attention online, and an outfit can become a hot seller, sometimes selling as many as 200,000 units after it is modeled by a star child.

Kidstar, a training school for child models headquartered in Hangzhou, has thousands of students, even though it charges 30,000 yuan for a 24-month course. The classes are so popular that the school is opening branches in other provinces.

And for those who may have concerns about the industry, child labor regulations prevent people younger than 16 from working in the arts and entertainment industry without parental approval.

Today’s Story in the Story looks at the child model industry and how it is helping young children develop manners and social skills that will benefit them later in life. 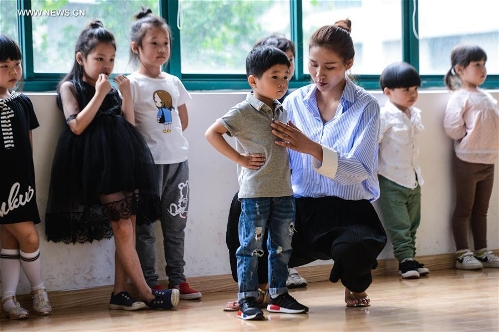 A teacher trains a boy at a child model school in Zhili County of Huzhou, east China's Zhejiang Province on May 18, 2016. (Photo: Xinhua)

Zheng Xinyan, a 5-year-old girl from Hangzhou, Zhejiang Province, earns money faster than her father by modeling clothes and posing for photos for online retailers.

She earns $28 per photo and models dozens of outfits a day, which far outstrips her father's salary.

Her father, Zheng Xu, who owns a clothing store, said standards for child models are not high. As long as a child looks cute, he or she can become a model.

The 27-year-old is one of many parents who have grabbed a share of the booming child model market.

Children ages 3 to 15 who are 95 to 120 centimeters tall are the most sought-after models. Some have become so popular that they are too busy to complete their courses at Kidstar and have already earned far more than their tuition fees.

In a video made by Kankan News in 2017, Ye Zuming, a then-11-year-old model for Taobao, said he earned about 800,000 yuan a year, adding that his motivation was "Everyone wants to live a wealthy life.”

Zheng Xu said he allowed his 5-year-old daughter to do modeling work for Taobao because he wanted to improve her confidence.

"She is too shy, so interacting with photographers she doesn't know may help her to make progress. Being a model can also help her develop good deportment. She's so young that she knows nothing about this work. Sometimes she is uncooperative and says she feels happier in the kindergarten, but I have to apply some pressure to train her and make her elegant," he said.

"I won't give her too much work or send her to too many modeling classes. It depends on her preferences, after all," he said. 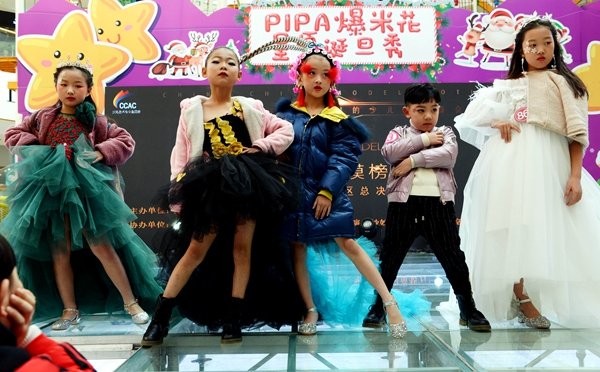 One mother said she wanted her 3-year-old girl to understand the rules of the game and realize that working is not always easy.

"Her work usually lasts an hour, during which she may wear about eight outfits. Although she complains of being tired, I need to ensure that she knows she will only get what she wants by hard work," she said.

"By making money, she can feel a sense of honor and improve her self-confidence. She can manage her wages by herself, and I won't meddle at all," she said.

Jiang Shuxiao signed up her daughter, Zhang Mengyao, for modeling courses and contests because the little girl enjoys the feeling of being a model.

"When she works the catwalk, she seems like another person, like an icy beauty. I wonder how this happened; maybe she is really into this and has a gift?" she said.

Enrolling the girl for modeling contests and a yearlong course has cost Jiang about 150,000 yuan, nearly half her annual salary.

"I will try my best to provide her with the conditions to develop her talent and prepare for a better future. I won't let her work right now, because she is too young. However, if she gets a really good opportunity, I will let her take it because it will help her," she said.

"Mengyao is lucky because many fans like her. In the future, I want her to live a worthwhile life and step onto a bigger stage," her mother said.