On a Friday afternoon, Jia Hua (pseudonym) picked up his daughter Ting Ting (pseudonym) from school in a hurry, as they were scheduled to attend an extracurricular class - fencing. It was Ting's third fencing class, in which she showed great interest. Ting is a seven-year-old primary school student in Shanghai.

"We didn't know about fencing when we first started. A salesperson called me up and invited us for a demo, and then we tried. My daughter showed great interest in it," Jia said. "Fencing is different from the popular sports we know of such as basketball, badminton or table tennis, and it's not bad for her to learn a new sport as well as improve her physical and mental well-being. So, I brought her to the class."

Today’s Story in the Story looks at what parents should think about before adding the extra burden to their kids' study load. 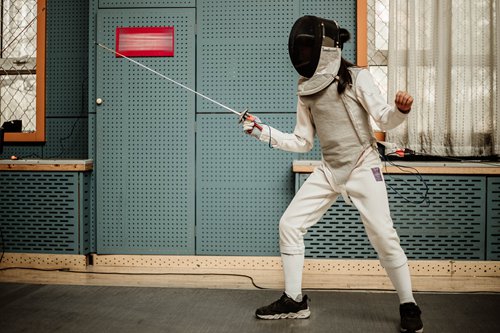 There are both physical fitness lessons with other students and technical training sessions for Jia's daughter. According to Jia, the fencing training center he chose has over 30 Chinese coaches and other renowned overseas coaches.

Jia said he has paid 25,000 yuan ($3,531.07) for one-year of lessons for his daughter and himself, which includes training fees and equipment for both of them. "I hope I can learn with her together to know the rules, which is good for me to communicate with my daughter as well as a good way to develop a new hobby for myself."

Jia is not the only parent seeking an extracurricular class for his child. In China, there are a rising number of extracurricular training centers, including that for math, English and painting.

Indeed, under huge academic pressure, it's not easy for Chinese parents to seek a balance between extracurricular and curricular classes.

"Most of the kids in my training center are full of extracurricular classes during the weekend," said Liu Shuo, CEO, and founder of Qu Shua Golf, a pan-nation family community golf institute and franchise.

Liu said many parents choose golf, fencing or equestrian instead of traditional sports like badminton or basketball because they hope their children can excel in forging a good social relationship, as well as learn some unique techniques which might be helpful in their future studies at home or abroad.

"Many colleges prefer to accept those students who are versed in nonconventional sports like golf or fencing," Liu said. "Take golf as an example, the sport can cultivate children's patience, independent thinking, and nurture willpower. It's not easy for a six-year-old child to practice golf for a long time in the hot summer. However, you have to be patient if you want to finish the game."

"Most of our students are from the middle-class families, who at least earn 500,000 yuan per year," Liu said. Liu admits that sports like golf, fencing, etc are not so cheap.

In Liu's golf training center, normally it costs 400 yuan for a one-hour class. If students want to hire a private coach, the price will be higher depending on the coaches' level.

"Yes, we have to say these sports like fencing, golf and equestrian are really good for children to learn new skills and have fresh experiences. But we can't afford it," said a 38-year-old mother surnamed Zhou, who lives in Beijing.

"I have sent my five-year-old kid to learn English online and it costs me nearly 200 yuan for one single class," Zhou said. "I'm also thinking of sending him to hone some extra sports."

During recent years, some local schools have introduced nonconventional sports to their curricula, teaching students rules, moves and skills.

In 2016, the Experimental School of Foreign Languages affiliated to East China Normal University became one of the first public elementary schools in the country to introduce golf as one of its compulsory courses.

"It would be a good trend if schools could include these sports like golf, fencing in the curricular class," said a Shanghai local primary school PE teacher, surnamed Wang. "Parents don't need to spend a lot to let their children experience these sports, while students could gain more knowledge to better communicate with international communities."