According to a recent study, monthly salaries for young white-collar jobs in China start at roughly $800.

A similar study found that some blue-collar positions held by women offered higher salaries than their professional counterparts.

Five years ago, women who worked as massage therapists, maternity caregivers, and manicurists earned upwards of $1,000 a month, 30 percent more than their white-collar counterparts.

Today’s Story in the Story looks at China’s blue-collar sector and the career opportunities it provides as white-collar job seekers remain unaware of how the income gap between the two sectors is not as wide as it used to be. 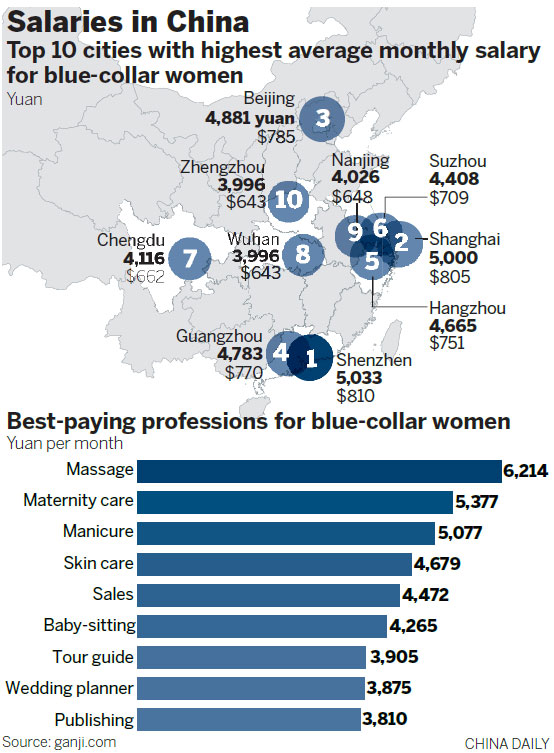 Chinese netizens have been impressed with her story as she pursues a welding career, typically considered a "man's job," while winning admiration from those around her.

As a little girl, Zheng first developed an interest in welding.

"I lived in an industrial park and often saw workers welding on the roadside. My mother would always pull me away to prevent me from watching. I could not help but glance at their work. The sparks looked like fireworks," Zheng recalled.

After she finished junior high school, instead of going straight to high school, she enrolled at a vocational school, so she could study welding.

"I need to spend five years in school learning how to weld. I am one of only five girls in my class of 38 students," she said.

The school has an elite group of welding students who are provided with more advanced training and prepare for national and international welding competitions. However, only four welding students are chosen every year.

The team’s welding coach, Zhang Tingwang, doused her hopes when he told her that girls were incapable of meeting his welding standards.

"She immediately asked to arm wrestle, and showed me her strong grip strength," the coach said.

Zhang told her that she could train with the team for two months. At the end of that period, if it were determined that she could not handle it, then she would have to quit.

"She performed the best out of the four recruits for that year and became the focus of our attention,” the coach said.

In April, she won third prize in welding at the 45th World Skills Competition trials as the only female competing in the category.

The eight-hour contest was so grueling that many male participants were unable to finish.

"I have participated in five skills competitions and every time I was able to win an award," she said with pride.

“Her welding work is better than that of many boys," said Guo Zehao, a student who joined the elite team at the same time as Zheng.

"Every time the sparks hurt her eyes, or melted iron scalds her skin; she deals with the wounds in private. She still chooses to continue in her welding path," Zheng's mother said.

Zheng later landed an internship at the local China Railway Rolling Stock Corporation, the nation's manufacturer of locomotives and rolling stock, where she was trained by the welding master, Zhang Zhong.

Zheng has become somewhat of an influential role model at her vocational school. And the elite team no longer sets limits on recruiting female students.

"My career goal is to become a welding master. Although a long way from now, I will still make efforts to reach it," she said.