Restaurants across China have been forced to look for new ways to market their culinary offerings since the onset of the coronavirus and many have turned to livestreaming online.

"First, let's fry the pickled agaric before adding shredded pork. Then, mix the sauce with the ingredients," he says in a video on how to make sliced pork with garlic sauce on the livestreaming service of major e-commerce platform Taobao.

Only a fifth of Meizhou Dongpo's income has come from walk-in diners since the COVID-19 outbreak, the rest comes from takeaway orders or selling raw ingredients and semi-finished products.

Today’s Story in the Story looks at how livestreaming is becoming an alternative revenue source for restaurants. 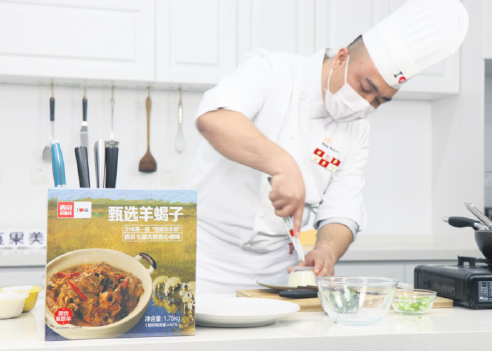 Wang Ruofei, a chef at the Xibei restaurant chain, demonstrates on a livestreaming show on the app Douguo. (Photo: CHINA DAILY)

His first livestream showed how to make yuanxiao, sweet dumplings that are traditionally eaten during Lantern Festival.

Sales of Meizhou's homemade luncheon meat, one of the main ingredients featured in Ye's livestream about Chongqing-style boiled blood curd, have increased 22-fold over last year.

"Usually, I only need five minutes to cook boiled blood curd because all the ingredients are already prepared. But in the livestream, I took 30 minutes to demonstrate how to prepare each ingredient separately and how to make the seasoning," Ye says.

Ye is one of Meizhou Dongpo's 3,000 chefs. That suggests great potential for more livestreams to promote the brand's products to reduce losses incurred during the epidemic in China.

A livestream on the app Douguo by Wang Ruofei, a chef at the Xibei restaurant chain, showing him making a beef dish attracted over 50,000 viewers. The chain sold 533 beef dishes and 684 portions of semi-finished lamb-spine hotpot following the streaming.

Douguo co-founder Zhong Feng says the company created a group for the restaurant chain’s chefs to livestream after Spring Festival.

"Our users are all interested in cooking, so the chefs' livestreams quickly became popular on our app," he says.

Many cooking apps and livestreaming platforms are cooperating with restaurants during the epidemic.

Liu Qiang, a chef of Shandong cuisine, started to livestream on the app Xiachufang last year and later filmed some pay-to-view cooking courses. The courses have become popular during the epidemic.

Each video about how to make one dish costs 19.9 yuan. Most of his courses have been purchased by about 2,000 people. 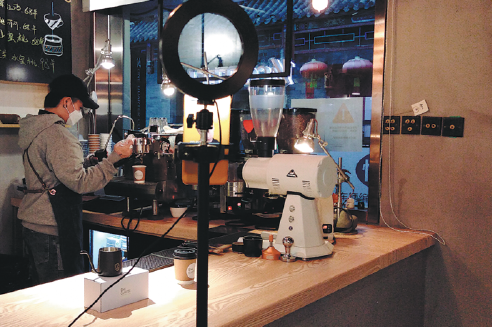 One Quarter Coffee in Beijing has started takeaway services and turned to livestreaming to promote its specialty. (Photo: CHINA DAILY)

Zhang Yan, founder of the One Quarter Coffee in Beijing, organized the brand's first livestream with her baristas.

"We lead the audience to visit our cafe and the hutong (traditional alley) where we're located. Also, our baristas show how to make our specialty coffees," Zhang says.

She opted against streaming on an open platform. The platform she used requires a QR code, which employees sent to family and friends.

"We may get fewer viewers than on an open platform. But we can ensure every single viewer is really interested in coffee," she explains.

"Coffee has a more specific consumer interest than restaurant food, which can be more indiscriminate."

The epidemic has stopped people from coming into the cafe to drink coffee.

The livestreaming not only brought Zhang dozens of orders but also helped her to gather two WeChat groups each with around 200 people interested in coffee.

"For the past half year, we have run a group with 700 coffee lovers. But we added 400 more in two hours with the livestream. It's amazing," Zhang says.

The livestreamed shows have inspired the 40-year-old to embrace new media and has also pushed her to do more online sales.

"Offline sales growth is slow. The epidemic has shown me that online promotion can make growth exponential."