"This is the Tianyahaijiao scenic area. Here, I will show you the beauty of Hainan," said the 46-year-old at Tianyahaijiao, a popular scenic spot in Sanya, a coastal city of south China's Hainan Province, livestreaming the beautiful seaside scenery to the audience online.

Having been engaged in the tourism industry for 24 years, Mai, also the secretary general of Haikou Association of Travel Services, started his journey around the island in early March and promoted the island province's tourism via livestreaming and short videos, as the tourist sites reopened to the public.

The outbreak of the novel coronavirus has disrupted many people's travel plans, but it has not dispelled their desire to travel.

Today’s Story in the Story looks at how even though people can’t physically take trips anywhere, they can still explore destinations via cloud tours. 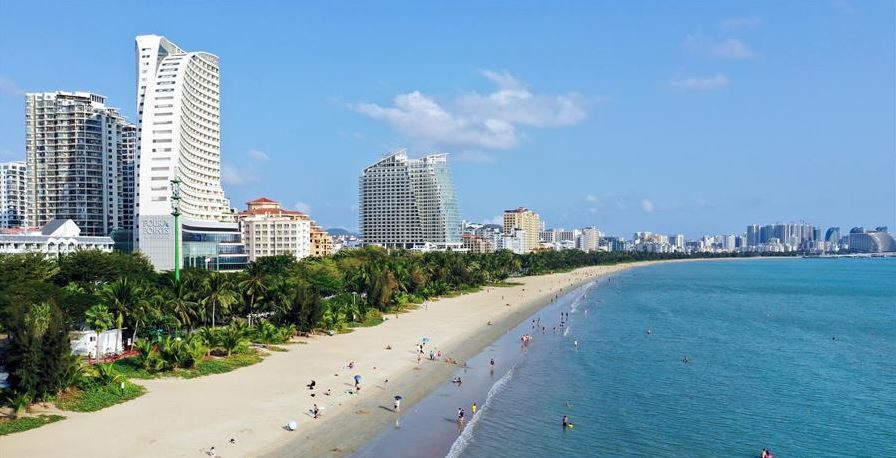 As the desire to travel is getting even stronger, "cloud tour" is becoming increasingly popular, especially among young people, which is also a new opportunity for Hainan's tourism industry.

"The influence of livestreaming is obvious amid the epidemic, so we should embrace the new trend and show the beauty of Hainan to those potential tourists in this new way," said Mai, adding that he was serious about promoting Hainan's tourism.

"Apart from displaying the fascinating landscapes of Hainan via online platforms and new technologies, what's more important is to spread the positive energy of tourism practitioners and explore new ways for tourism marketing," said Mai.

A few tourism enterprises in Hainan including tourist attraction management companies and travel agencies have been trying livestreaming since March, to warm up the recovery of the island's tourism market.

Zhang Weiwei, the marketing director of a local tourism company, recently finished the first season of livestreaming with his team on a road trip around the island.

"It took us 10 days to travel along the eastern and central tourist routes of the island. We mainly checked the recovery of the scenic spots and hotels along the routes," said Zhang.

Zhang said his four teammates were either experienced travelers or tour guides. "The professionals are better at introducing Hainan from a different angle," he said, adding that a three-hour livestreaming video usually attracted nearly 4,000 viewers. "Some viewers were quite interested and asked us how to book the tour."

While the coastal tourism of eastern Hainan has been quite popular, the central and western parts are hardly known to the public. Zhang said they would travel in western Hainan and start the second season of livestreaming in early April, showing more natural and unknown sceneries and local delicacies.

One of Zhang's livestreaming fans said, "We have been stranded at home for a long time. Watching the livestreaming, I feel as if I also joined the tour personally on the scene.

"I have not visited some of the places they show, which has aroused my interest to go in the future. After the epidemic recedes, I will take my family to go around there," the netizen said.

According to a survey report jointly released by the China Travel Academy and Trip.com Group on March 19, Chinese are longing for tours across the country, with Hainan ranking the second preferred among the top 10 destinations.

"The tourism practitioners went all out to promote Hainan online, which will finally be rewarded," said Mai, noting he was confident that Hainan's tourism products will attract many tourists when the epidemic is over.

Hainan, on March 24, reduced its existing number of cases of COVID-19 to zero as the last coronavirus patient on the island province left hospital.

Hearing the news, Mai was very excited. "Please come to Hainan," he sent an invitation to people online.