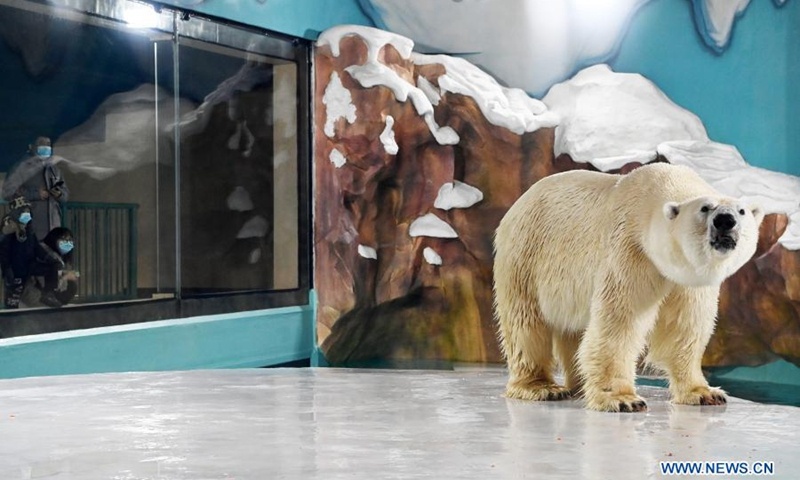 The polar bear hotel in Northeast China's Heilongjiang Province has responded to accusations that it is disregarding animals' living conditions, giving vague answers implying that it has been taking good care of the animals.

A park in Harbin, capital city of Heilongjiang, has come under fire for opening the world's first "polar bear hotel," with many accusing it of seeking profits at the cost of the suffering of wild animals.

The Polar Bear Hotel is located in the Harbin Polarland theme park and opened on March 12, advertising itself as the world's first hotel with direct access to polar bears.

With 33 transparent reinforced glass panels in the indoor arena where the bears are kept, visitors can watch the bears 24 hours a day during meals or from their hotel rooms, and even enjoy the experience of feeding the bears.

Although the hotel claimed that the Polar Bear House strives to recreate real Arctic conditions, photographs taken by the media and visitors show that the icy landscape is actually a white floor and walls painted with snow and ice patterns.

Many Chinese netizens expressed concerns that the lights being left on at night could keep the polar bears awake and cause them to collapse.

In response to accusations, a staffer at the hotel told the Global Times that the polar bear house inside the hotel "may turn off the lights at night" and they have man-made dens to live in, but responded vaguely to questions over whether the bears' lives were affected.

"Polar bears belong in the Arctic, not in zoos or glass boxes in aquariums - and certainly not in hotels," Jason Baker, a senior vice president at animal rights group People for the Ethical Treatment of Animals (PETA), said in a CNN report on Tuesday.

PETA also pointed out that polar bears spend 18 hours a day in the wild and travel thousands of miles.

According to media reports, two polar bears at the Harbin Polarland suffered depression years ago because of their cramped living conditions, and finally recovered after being moved into a new, larger venue.

Harbin Forestry Bureau and Administration for Industry and Commerce did not respond to the Global Times' request for comment.

"By using polar bears as a commercial gimmick, hotels are not only causing harm and suffering to the animals, but also increasing the risk of personal injury to tourists. It is also seriously misleading the public about the scientific knowledge of wildlife protection," Zheng Yu, an expert from World Animal Protection, told the Global Times on Wednesday.

Zheng noted that in the wild, polar bears can cover a range of tens of thousands of square kilometers, while being kept in playgrounds and hotels, the lights, temperatures and facilities are unable to meet the animals' basic environmental needs. According to a survey conducted by the World Animal Protection, nearly 90 percent of tourists are willing to choose "wildlife friendly" travel.

Zheng pointed out that a number of zoos in China have already cancelled wild animal shows and are actively engaged in public awareness campaigns focused on animal welfare.

"We expect domestic zoos, aquariums and other institutions to pay more attention to animal welfare and transform these sites into animal protection bases and nature-related education sites where humans and animals live in harmony," Zheng said.