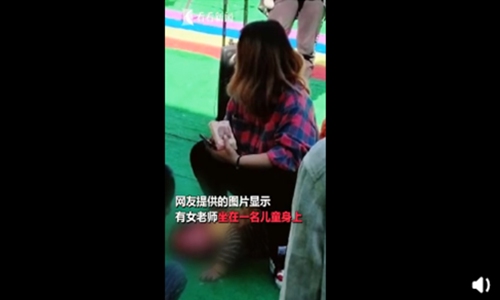 Police in Beijing's Yanqing district on Thursday arrested two employees of a rehabilitation center for children suffering from hearing impairment on suspicion of child abuse.

After Weibo user Youshangdeshaoxiao on Wednesday posted photos and videos and accused the Mingsheng Hearing Rehabilitation Center of child abuse, authorities began to investigate the allegation, the Yanqing district government said on its Weibo account on Thursday.

Online photos show dark and messy rooms, beddings with excrement and a young woman sitting on a crying child on the ground. A video shows a woman poking a boy with a broomstick.

The net user claimed that the materials are from a Weibo follower, who claimed to have interned at the center which accommodated more than 30 children with hearing difficulty, infantile autism or mental retardation. The intern accused the center of beating children, embezzling food donated by charities, not attending to the minors and defaulting payment to employees.

"Kids are beaten up and the center is unsanitary. Children are so hungry that they pick up food dropped on the floor. Some were found drinking water from a toilet tank, and the teachers would beat them," Youshangdeshaoxiao quoted the intern as saying.

Teachers are not trained in special education and lack health certificates, the blogger added.

According to Chinese enterprise information provider tianyancha.com, the center is run by the Beijing Mingsheng Education Consultation Co, with two investors.

Ba Enzhou, one of the investors, confirmed with Red Star News that the photos were taken at the center but did not show the whole picture.

The photos and videos were uploaded by a former employee who left the center without proper procedures with the company. The employee failed to teach the children how to use a toilet, and that's how photos of dirty beddings were taken, Ba told media.

Some autistic children have an odd temper, and scenes of the teacher playing with them might be misinterpreted, he said.

The photos sparked uproar among netizens, who urged a thorough investigation and strict punishment.

The case put a strain on Chinese society which has been traumatized by previous abuse cases.

In 2017, a private kindergarten in Beijing inserted needles on children and fed them pills. The person involved was sentenced to 18 months in prison and banned from working in an industry involving minors for five years.

"Surveillance cameras can help prevent abuse, but there is never a guarantee," the teacher surnamed Mu said.

Mu also noted the shortage of qualified people. "There are not enough qualified teachers, and the heavy working burden with low salaries discouraged many people from the industry," Mu said.

The public has also called for a lifetime blacklist for people who have records of child abuse.