Police crack down on gambling at cruel dog racing event 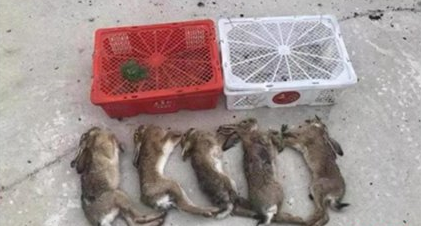 The races in Yuanbaoshan district in North China's Inner Mongolia Autonomous Region last only a few seconds before one of the dogs kills the rabbit. (Photo: China News)

Police in North China have detained 31 gamblers who took dog racing to its cruelest end possible by releasing a pair of greyhounds or whippets on live rabbits.

Participants bring their dogs to a 5,000-square-meter field where two dogs are released at the same time. The first to chase down and kill the rabbit is declared the winner, a video posted by China News on Friday shows.

Unlike dog races in the US that have multiple canines chasing a mechanical rabbit around a lengthy track, the races in Yuanbaoshan district in the Inner Mongolia Autonomous Region last only a few seconds before one of the dogs kills the rabbit.

Local police in July discovered that gamblers were using WeChat to call spectators to a cornfield to wager on the unusually cruel betting event, reported China News.

After an investigation, which apparently lasted months, police arrested and fined 31 people for gambling, which is illegal in China.

One of the organizers is still wanted by the police, the report said.

Many of the comments left by netizens pointed to the cruelty of the event, even though the China News report didn't mention if the gamblers were also charged with an animal cruelty offense.