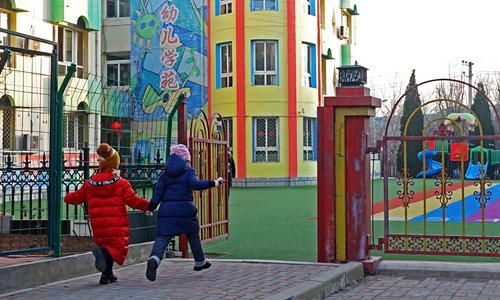 The head of a kindergarten in Central China's Henan Province was detained for suspected sexual assault of a 4-year-old girl.Police in Sheqi county, Henan Province, said on Friday on its Sina Weibo account that they had detained the head of Happy Baby Kindergarten surnamed Sun, after a video accusing him of raping children went viral on the internet.Police said that they are investigating and obtaining evidence under the local procuratorate's direction.The video shows a mother protesting at the kindergarten's gate with a banner reading "Brute Sun sexually abused a little girl, immoral and outrageous!" According to a police's notice in the video, the 4-year-old victim Xiaoya (pseudonym) told her parents that Sun took her to a bed and sexually abused her after parents continuously asked her why she did not want to go to school.After receiving the tip-off, the police said they immediately assigned a gynecological examination on Xiaoya and interrogated Sun.The girl's family found that there are lacerated wounds on Xiaoya's urethral orifice and that her genitalia was swollen with blood. The gynecological examination result shows Xiaoya's hymen was broken.The video shows the kindergarten implemented a closed management system where parents could not enter the campus during class time. Sun cooked for students and ferried them to school. A person familiar with the matter told the Beijing News that the kindergarten runs without officially issued qualification, noting that the kindergarten was poorly managed and the surveillance cameras were powered off.The kindergarten is located in a residential building and has 55 students in three classes under the four teachers' guidance, said the person, who asked for anonymity, adding that Sun is the only adult male in this kindergarten. The Global Times has tried to reach the office of Education and Sports Bureau of Sheqi County in order to inquire about the kindergarten's qualification but no one answered as of press time.