A truck hurling out of control down a steep cliff tumbled more than 80 meters before being stopped by an immovable boulder, prompting a team-up between villagers and police to rescue the trapped occupants, according to China News Service.

The incident occurred at the Yangla twon, Deqin County in Yunnan Province. Yangla is known as the “province of chickens and sounds,” and is home to some of Yunnan’s most remote roads. 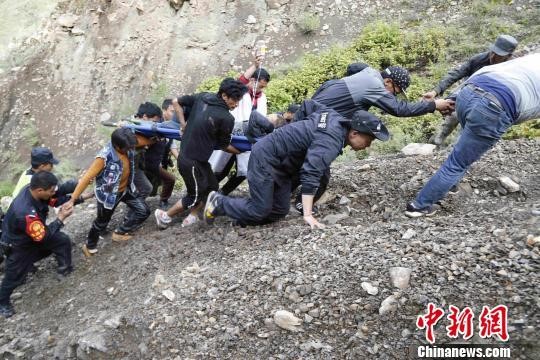 People and police team up to carry a victim on a stretcher. (Photo: China News Service)

The average elevation is more than 3,000 meters, and peaks separated by deep valleys abound. Traffic accidents are common here and playfully referred to by locals as "air disasters."

On Wednesday, villagers telephoned to report a truck had fallen off a cliff on the opposing side of a mountain, imploring the authorities to assist. Policemen rushed to the scene and saw a truck trapped on a precipice more than 80 meters down.

Tools in hand, police officers made their way toward the twisted hull. They soon discovered two occupants were trapped inside.

After 40 minutes of arduous work, the rescuers succeeded in transporting the victims to an nearby ambulance.