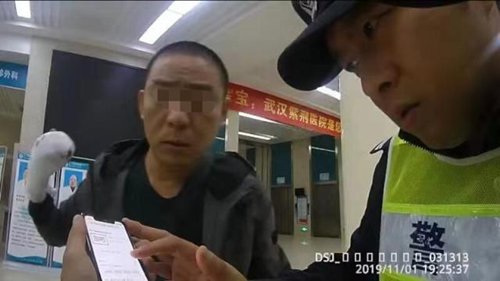 A police officer in Wuchang, Wuhan city of Central China's Hubei Province helped a patient find his severed finger, which was left in a taxi, local media reported.

The worker, surnamed Xu, accidentally cut his finger off by a machine at an Ezhou city construction site of Hubei Province on Friday, Chutian Video under Wuhan-based Chutian Metropolis Daily reported on Monday.

The doctor advised that the finger must be reattached within five hours.

Xu and his coworker hired a cab at 4 pm heading for Wuchang for the surgery, traveling a distance of approximately 60 kilometers from Ezhou.

When the cab met traffic congestion near the hospital, Xu and his coworker decided to run to the hospital.

However, they didn't notice the severed finger, wrapped in paper tissues, was left in the cab until they arrived at the hospital. They could not reach the taxi driver since they did not get a receipt nor could they remember the plate number.

Chen Fan, the police officer, contacted the traffic control department soon after receiving Xu's call for help at 7 pm, according to the report of Chutian Video.

Chen and Xu's coworker then checked the surveillance footage and called a Wuchang traffic radio station to spot the cab. After the broadcasting, the message spread rapidly in various cab drivers' chatting groups.

After 30 minutes, a 46-year-old cab driver surnamed Xiao contacted the patient and said that he turned back soon after finding the lost finger on the backseat, but the traffic was heavy.

Chen confirmed Xiao's location and prepared to open a way for the taxi, but Xiao said the traffic was clear by then and he was on the way to the hospital.

The severed finger was sent to the emergency room in time and is connected to Xu's hand.