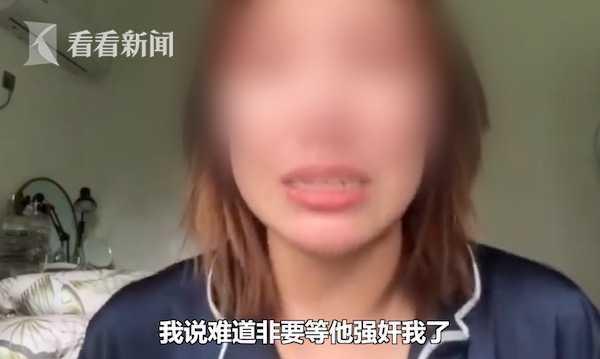 Screenshot of the video in which a woman wails about being sexually harassed and threatened with violence by a man surnamed Guo. (Photo: web)

A video that went viral last week on Chinese social media that showed a woman from Maanshan, Anhui province, wailing about being sexually harassed and threatened with violence by a man surnamed Guo, turned out to be staged, local police said on Tuesday.

The woman, surnamed Pei, has been criminally detained by police for disorderly behavior, and the case is under further investigation, the police bureau of Maanshan's Huashan district said.

On Thursday, Pei posted a three-and-a-half minute video on Sina Weibo, sobbing and complaining that she had been receiving death and rape threats from Guo for half a year, and she hoped to ask netizens for protection because the police had turned a blind eye to the threats.

The local police said the video received more than 50 million views and spurred a massive online backlash against the police for dereliction of duty. The video and the Weibo account from which it was posted have been deleted.

The police bureau said it organized an investigation after the controversy broke and discovered that Pei was an online merchant who sold a fake bracelet for 1,000 yuan ($145) to Guo via WeChat in January.

After Guo found out the bracelet was only worth about a few dozen yuan, he tried to contact Pei to return the item and ask for a refund. But Pei declined Guo's contact attempts and blacklisted his phone number and WeChat account, so Guo used his friends' phones to call Pei.

The police found that the threats mentioned in the video, as well as claims that the local police refusing to deal with the case, were all fabricated by Pei. Nevertheless, the video has caused "severe negative social impact", the statement said.

Zhao Min, an actor, said on his Sina Weibo that he felt something was sketchy the moment he opened Pei's video. "First, Pei gave no evidence. The police not arresting people based solely on your side of the story cannot count as not doing their job."

The Central Political and Legal Affairs Commission of the Communist Party of China said on its WeChat account on Tuesday that police and legal authorities are not tools to manipulate public opinions.

"It is the unshrinkable responsibility of the police and law enforcement to protect the safety of the people and society," it said, adding that it is despicable for someone to "take advantage of the police authorities for their selfish goals, toy with the emotions of millions of people and throw baseless shade at the police".

"They have proved with their blood and lives that their paramount mission is to protect the interests of the people," the commission said.

"Those who are creating and spreading rumors will inevitably pay the price," it said. "Even if they received short-lived fame by mongering fear and anxiety, netizens will eventually stop buying into their chaos-inducing content."