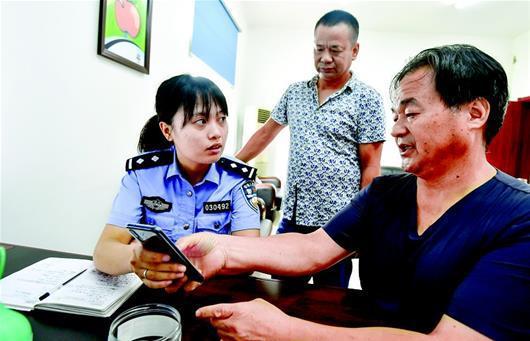 A policewoman is constantly heaped with praises from her fellow co-workers based on her intelligence, background as a lawyer, and outstanding professionalism, according to a story by huanqiu.com.

Gao Ling, a police officer with Jiangti Police Station, Wuhan, in Central China’s Hubei Province, is known around the station for her hard work and determination, which has led to her retrieving some 10 million yuan in illegal funds over the last two years.

In 2017, Gao received a call from a man with the surname Shen, who was crying desperately and asking for help.

“Don’t worry sir, I will help you,” Gao said to the victim.

Gao soon learned that Shen’s buyer cut off all contact with him, after Shen shipped steel products worth nearly 1.7 million yuan to a construction site. Shen was crying because that was all of his money.

Gao started investigating Shen’s case, travelling to Ezhou twice and uncovering evidence to find the thief who stole from Shen. In June 2017, Gao arrested a suspect with the surname Wang. During this time, Gao frequently traveled to Ezhou until Wang confessed to the crime.

Gao’s husband is an engineer, despite the fact that he can only see his wife during the weekends, he said he supports her career.

“It is not easy for a female to work in the police force, and the only gift I can give to my wife is my understanding,” Gao’s husband said.