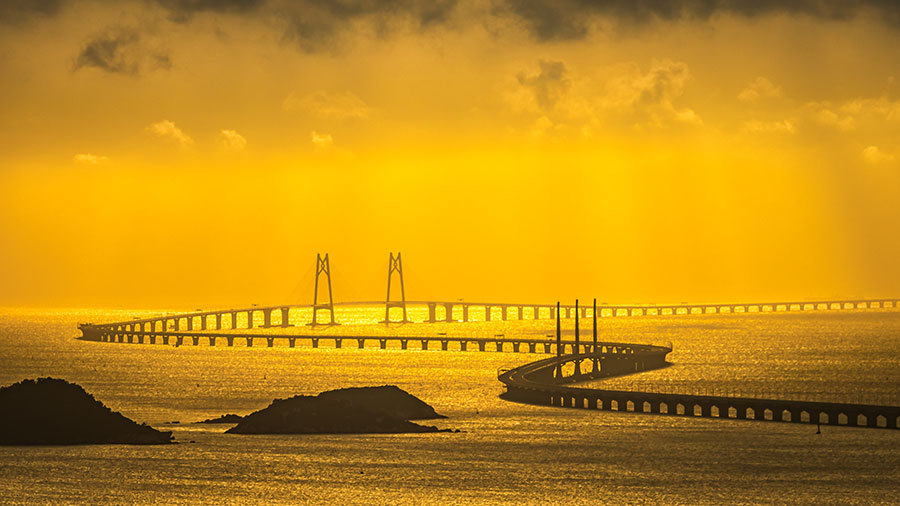 The Hong Kong-Zhuhai-Macao Bridge plays an important role in the development of the Greater Bay Area. (Photo: China Daily)

Construction of the Bay Area is a national strategy and the Guangdong Committee of the Chinese People's Political Consultative Conference, which includes many experts and scholars, should contribute their wisdom and strength, Wang Rong said in Guangzhou, the provincial capital, on Sunday while delivering the opening speech at the 3rd session of the 12th CPPCC Guangdong Committee.

Guangdong is sparing no effort in speeding up construction of the Guangzhou-Shenzhen-Hong Kong-Macao scientific and technological innovation corridor, he said, adding that development of an internationally competitive, modern and advanced manufacturing industry was its priority.

"Guangdong CPPCC members should actively put forward their valuable proposals to help achieve the goals," Wang told 741 members of the CPPCC Guangdong Committee attending the session, which ends on Wednesday.

Wang also urged members to learn from the experience of other world-class bay areas and carefully study and compare the systems, policies, regulations and rules in Guangdong, Hong Kong and Macao in the fields of finance, logistics, market supervision and industrial standards under the "one country, two systems" framework to help government departments construct an open economic system in line with international standards and remove obstacles preventing development of the three regions.

He also asked them to expand exchanges and cooperation with Taiwan compatriots in Guangdong to boost integrated development across the Taiwan Straits and oppose separatism.

Wang praised members of the CPPCC Guangdong Committee from Hong Kong and Macao for supporting Hong Kong's chief executive and the Hong Kong Special Administrative Region government's law-based governance, which was putting the city back on track after last year's turmoil.

Ma Guangyu, vice-chairman of the CPPCC Guangdong Committee, said its members put forward 113 proposals on construction of the Bay Area and expansion of exchanges and cooperation between Guangdong, Hong Kong and Macao last year.

Yang Qi, a member of the CPPCC Guangdong Committee, said he proposed further integrating the patriotic cultural resources of Guangdong, Hong Kong and Macao to help introduce special patriotic cultural tourism routes in 2021, when the Communist Party of China celebrates its 100th anniversary.

"The special patriotic culture tourist routes are expected to become a brand name of tourism in the Guangdong-Hong Kong-Macao Greater Bay Area, playing an important role in enhancing cultural and tourism exchanges and cooperation in the three Chinese regions in the following years," said Yang, who is director of the Guangdong Museum of Revolutionary History.