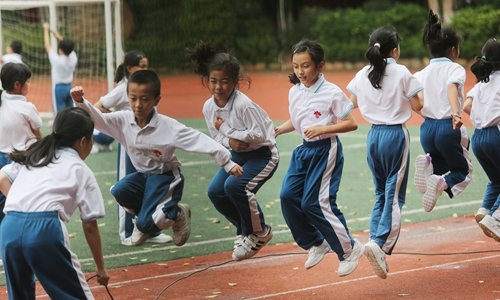 The topic of increasing the "masculinity" of boys has once again become heated on Chinese social media after a Chinese political advisor suggested that primary and middle schools should hire more male teachers to promote the "sex-balance" on the campus, following controversy over a proposal from Chinese education authorities in January on strengthening "masculinity" education for boys.

Zhu Yongxin, a member of the National Committee of the Chinese People's Political Consultative Conference (CPPCC), made the suggestion on Tuesday in an interview ahead of the opening of the national two sessions, China's main annual legislative meetings.

He claimed that a lack of male educators could have an impact on the "masculinity" of students and encouraged veterans to go into teaching careers.

Though both masculinity and femininity have their own beauty, a balance between the two should be kept in school and the whole society as "too much femininity will lead to a lack of 'vitality' and 'harmony,'" he said.

Zhu's comment hit the nerve of netizens who saw similar remarks in a proposal by another political advisor during the two sessions in 2020, which triggered a new round of discussions on the essence of "masculinity" and whether boys need to be judged and educated on the way they are.

"Being responsible, kind and upright is what I see as being masculine. The teacher's gender doesn't matter in educating students to be masculine that way," wrote one Weibo user.

Critics argued that Zhu's proposals will lead to gender stereotyping, and some brought up the tragic death of Ye Yongzhi, a 14-year-old boy on the island of Taiwan, who had been bullied at school as he behaved "feminine."

The controversy over increasing the masculinity of boys started in May 2020, after political advisor Si Zefu put forward a proposal at a two sessions meeting that called on the country to strengthen education for boys to become more "masculine."

Si said that the "feminization" trend of Chinese teenagers could be attributed to the fact that most teachers in schools from kindergartens to high schools are women, as well as the frequent appearance of "pretty boys" in TV and films.

The discussion followed after the Chinese Ministry of Education in January said it would enhance physical education and psychological direction for students in response to Si's proposal on "avoiding feminization of teenage boys."

After seeing the second "masculinity" related proposal coming from political advisors, many netizens called to stop attaching gender labels to children and give them more space to decide what they want to be.