Chinese Ministry of Foreign Affairs said Monday that China continues to oppose groundless accusations by US Secretary of State Mike Pompeo and urged him to stop spreading "political virus." 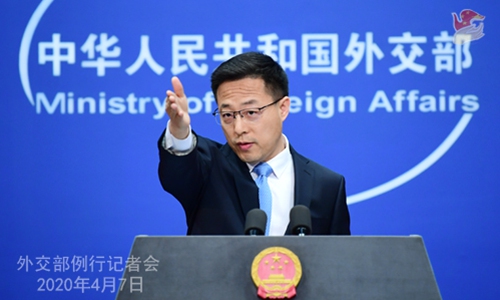 Zhao Lijian, spokesperson of the ministry, said at a press conference that China firmly opposes Pompeo's groundless accusations against China which try to drive a wedge between China and other countries.

Zhao said Pompeo's remarks went against the basic facts and norms of international relations, and would only expose his deep-rooted Cold War mentality and ideological bias, which the Chinese people have long seen through and has no market in the international community.

"We advise the US politician to correct his mistakes, stop spreading "political virus," and do more to promote China-US cooperation rather than undermine it," Zhao noted.

Zhao's comments came after Pompeo viciously attacked China at the virtual 2020 Copenhagen Democracy Summit on Friday and forced European countries to choose between Beijing and Washington. Observers said Pompeo's Friday speech demonstrated his "petulance" for not being able to promote things according to his wishes.