Some people in the US should not overestimate their ability to spread rumors, and the trick of a thief crying "stop thief" is doomed to fail, Ministry of Foreign Affairs spokesperson Geng Shuang said Thursday at a routine press briefing. 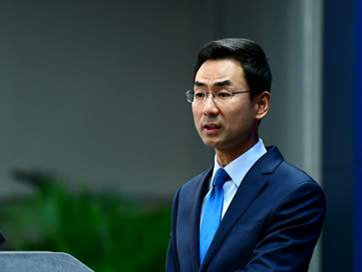 In response to US Secretary of State Mike Pompeo's allegation that China engages in espionage through business, Lu said that some US politicians for some time have attacked and discredited China wherever they go, to hype up China's threats, to frame China's development aid as a "debt trap", and to slander China with unfounded charges. This move is thoroughly immoral and unfair.

He stressed that China has always cooperated with developing countries based on mutual respect, equality and mutual benefit, and offers aid without any political conditions within China's ability. It has effectively promoted development of the local economies and improves the local residents' livelihood, which has been widely welcomed by all parties. There is no such country that falls into a claimed "debt trap" due to cooperation with China. The US' statement is totally inconsistent with the facts, and this move to smear China will not succeed.

Geng added that the Chinese government has consistently required Chinese companies to strictly abide by local laws and regulations when conducting business in foreign countries. Some forces in the US that are spreading the rumors that China engages in spying through business are politically motivated and unscrupulous. It is known to all that the US maintains its own economic and technological hegemony by using this trick of a thief crying "stop thief", which is doomed to fail.

"Lies repeated a thousand times are still lies. Some people in the US should not overestimate their abilities to spread rumors and do not underestimate others' judgment ability," spokesperson emphasized. "We urge these people to discard Cold War mentality and zero-sum thinking, and to treat China objectively and correctly and do more things that are conducive to Sino-US cooperation.”