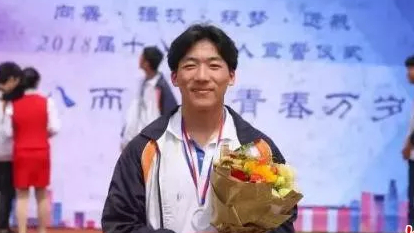 An impoverished 18-year-old man from a small village in east China’s Zhejiang Province, who was about to go to a college in autumn, refused to take any donations and insisted on selling watermelons to earn his tuition fees.

Li Enhui, who was brought up by his foster father after his mother abandoned them, had dreamed of becoming a policeman since childhood and was successfully admitted to Zhejiang Police College this year.

However, facing the expensive tuition fees of about 14,000 yuan (2,044 US dollars) that the poor family couldn’t afford, he decided to earn it on his own by selling watermelons during the summer vacation.

For every kilogram of watermelons sold, he earned a profit of only 0.2 yuan. So, he had to sell nearly 70,000 kilograms of watermelons to meet his goal. So far, the gritty young man has earned more than 8,000 yuan, he told Chinanews.com.

Earlier while he was still in high school, Li had started taking up various part-time jobs to earn some money in a bid to support the family. He had done multiple jobs, varying from a dishwasher to a deliveryman.

Selling watermelons was not an easy task for Li. On the first day, he only sold one watermelon and he didn’t sell out his stock even on the third day. So he asked a woman in the wholesale market for help. She advised Li to sell the fruits in a crowded area.

Unfortunately, an unexpected accident incurred a massive loss costing nearly all his earnings from a month. On his way to transport the watermelons, he fell from the electric bicycle and got badly hurt. The medical treatment cost him more than 1,000 yuan.

After being forced to lie on the bed for a few days, Li resumed his business despite not fully recovered.

Xu Guiqin, a nurse who took care of Li when he was injured, told Chinanews.com that when she realized that the man was going through a perilous time, she offered a donation to relieve him of some of the hardship.

However, conscious of his self-respect, Li politely refused the offer. Therefore, the decided to help him in another way – helping him in selling watermelons during her spare time.

Li said many local residents who knew about his tough circumstances offered donations to help him, but he turned down each of them.

“This is about a person’s principle and dignity,” he told Chinanews.com, adding that he believed it was important to strive for something you want through your own effort.

Li’s teachers and schoolmates from the school he graduated also supported his business by buying some watermelons and even helped him to sell them, which made him feel humbled.

“I believe all my difficulties are just temporary and everything will be fine,” he said, adding that he felt grateful for those who helped and supported him during the tough days and he was encouraged by these gestures.

Li’s story was widely circulated on Chinese social media and netizens lauded his strong will and commitment to his dream. Many saw Li as a source of inspiration.

“The tough circumstances won’t knock down the real strong man, but rather pose as a sharpening stone that forwards him,” commented a user @tiangaoyuntan.

“As a millennial, Li’s independent attitude, strong will and gratefulness towards the toughness have always inspired us,” said a user @yongbuzhibu.