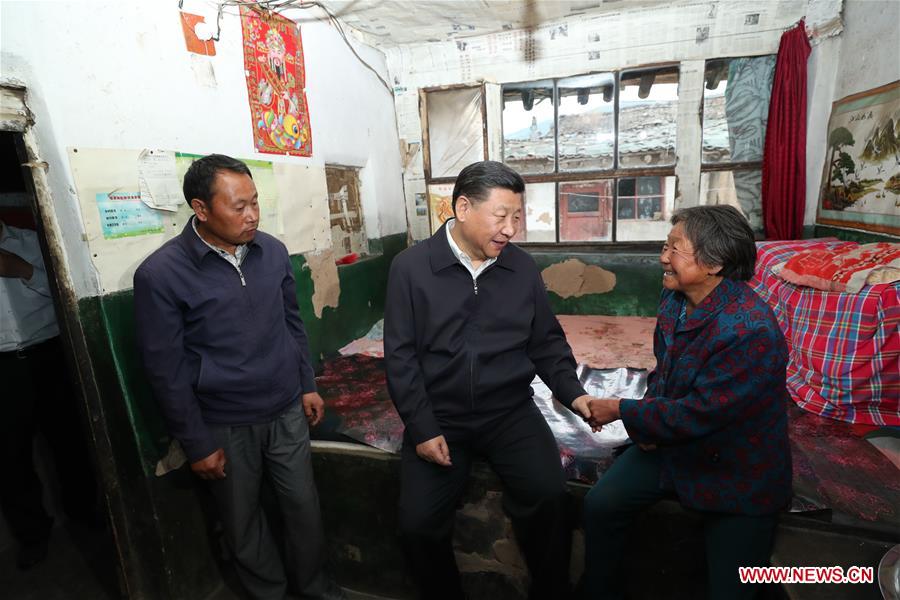 Chinese President Xi Jinping visited Zhaojiawa and talked to villagers, including the three families, on June 21, 2017. Xi spoke of improving living conditions through relocation and called for better support measures that would ensure income sources for residents.

Three months later, Zhaojiawa village became the first in the county to finish relocating the whole village for poverty alleviation.

The three families now make a good living with their new jobs. Liu Fuyou and his wife have signed a contract with a cleaning company and makes 1,050 yuan ($155.6) per month. Cao Liuren works for a glass cotton factory for 2,800 yuan per month, and Wang Sannyu also works as a cleaner.

The three families hung their photos with President Xi on the wall in their homes.

Zhaojiawa village is a poor area in Kelan county, without buses or regular supply of electricity. The only well in the village could not feed villagers for drinking and irrigation water at the same time.

Originally there were 54 households in the village, but many of the younger generation and the people who are better-educated have left the village.

The 13 senior villagers in six households left behind in Zhaojiawa village gradually accomplished relocation through the help of grassroots officials.

The first secretary of the Zhaojiawa village Party committee, Chen Fuqing, is one of the 92 officials and 72 newly recruited public servants sent to Kelan county. He helped every household protect their roofs and offered seeds for spring plowing.

His private car became a shared car for villagers. He drove Wang Sannyu to her two grandchildren studying in a school in Xinzhou, and drove villagers to see a doctor in town when needed.

Wang Zhidong, the first secretary of the Kelan county Party committee, led a team to Zhaojiawa village to introduce government policies for poverty alleviation, including subsidies for relocation and public services construction.

Kelan county made plans for 24 major and serious diseases and 52 chronic diseases, to ensure health services for senior people.

President Xi vowed continued efforts to improve people's lives and asked everyone to "roll up  their sleeves and work harder together with the CPC Central Committee" during his tour on June 21, 2017.

Many young people who left the village now join the efforts to improve people’s lives in their hometown. Ma Xiaofei, one of the first youths who left the village, designed a travel route from Erdos City, north China's Inner Mongolia Autonomous Region, to Kelan county, in the travel agency he started after graduating from college. The route has seen an increasing number of tourists, reaching 4,000 in 2018.