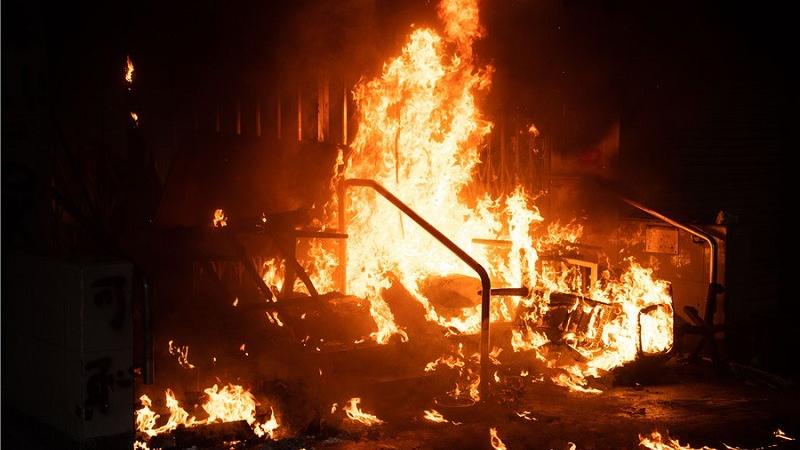 Rioters set fire at the entrance of an MTR station in Hong Kong on Oct 1, 2019. (Photo: Xinhua)

American businesses in Hong Kong are worried that the passing of the Hong Kong Human Rights and Democracy Act will be counterproductive to their interests in the special administrative region.

The American Chamber of Commerce in Hong Kong, which represents more than 1,200 US companies operating in the city, warned that the bill's passage may bring "unintended, counterproductive consequences for American businesses and their ability to continue exercising a strong positive influence in support of Hong Kong's traditional core values".

According to US statistics, the US has, in the past decade, recorded the largest bilateral trade surplus with Hong Kong among its trading partners worldwide, exceeding US$33 billion last year.

"We hope the implementation of this act will not at all undermine the effective cooperation US and Hong Kong authorities currently have on export control, or limit Hong Kong's legal enforcement of criminal law due to US sanctions," AmCham said in an emailed response to China Daily on Wednesday.

"Any enactment that loses sight of Hong Kong's unique circumstances and its extraordinary, continuing achievements as a bastion of free expression, free flow of information, free markets, individual liberty, rule of law and judicial independence will diminish the reality or the perception of Hong Kong's high degree of autonomy under 'one country, two systems' and damage Hong Kong's role as an international business center," the statement said.

About 1,344 US companies have branches in Hong Kong, of which 278 are regional headquarters. About 85,000 US citizens live in the SAR, according to Invest Hong Kong and the Census and Statistics Department.

circumstanThe US Senate unanimously passed the Hong Kong Human Rights and Democracy Act on Tuesday after the House of Representatives approved its own version last month. The two chambers will have to work out their differences before any legislation can be sent to US President Donald Trump for his signature.

Fielding Chen Shiyuan, Hong Kongbased senior vicepresident and economist at China Construction Bank (Asia), said if the bill eventually becomes law, it does not necessarily mean that Hong Kong's preferred status as a separate customs territory, nor the US dollar peg to the Hong Kong currency, will be rescinded.

However, he pointed out, potential retaliation from China could have a huge impact.

"If the situation deteriorates, so much so that the ongoing SinoUS trade negotiations get killed, the US stock market, multinationals and even its economy will take a big hit. If it goes that far to affect Hong Kong's stability, US business interests in Hong Kong, be it the Hong Kong Disneyland Resort or US highend consumer brands, will also be undermined," Chen warned.