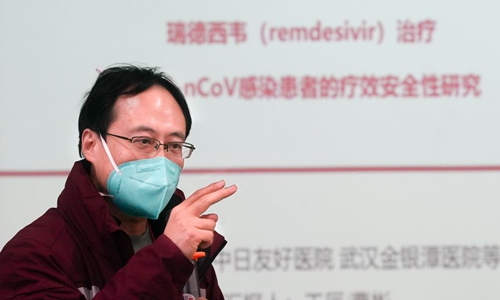 Chinese researchers have been racing against time to screen treatments for the novel coronavirus infection. Here are some drugs found with potential to defeat the virus, some having entered clinical trials and some being suggested in treatment guidelines.

Remdesivir is a drug developed by US pharmaceutical company Gilead Sciences.

A total of 761 patients have been enrolled in a randomized, double-blind and placebo-controlled clinical trial of the drug in Wuhan.

The trial is expected to start on Thursday and will be conducted in several hospitals in Wuhan, including the Wuhan Jinyintan Hospital.

Chloroquine, a widely used anti-malaria and autoimmune disease drug, has been used for more than 70 years.

It has been known to block virus infections by changing the acidity and basicity value inside the cell and interfering receptors of SARS coronavirus.

In a recent study, Chinese researchers found that it can effectively inhibit the novel coronavirus infection in vitro. It also shows immune-modulating activity, which may enhance its antiviral effect in vivo and is widely distributed in the whole body, including the lungs, after oral administration.

An official said at a press conference held by the National Health Commission on Tuesday that chloroquine has been selected as drug candidates for further animal experiments and clinical trials.

Anti-HIV drugs got on the list as Chinese researchers screened marketed drugs as well as databases for high potency compounds and for compounds from medicinal plants.

A study published in 2004 showed the anti-HIV drug combination of Lopinavir and Ritonavir has "substantial clinical benefit" when given to patients who had SARS.

The combination targets protease, an enzyme used by HIV and coronaviruses to break down proteins when they make new copies of themselves.

The Wuhan Jinyintan Hospital, where the first 41 known patients were treated, has already launched a randomized, controlled trial of the anti-HIV drug combination, according to a report by Chinese researchers in the Lancet late last month.

The third version of novel coronavirus treatment guidelines published by the National Health Commission suggested that taking two Lopinavir/Ritonavir pills and inhaling a dose of nebulized alpha-interferon twice a day could benefit patients.

Arbidol, an antiviral drug used for treating influenza in China, could be combined with the anti-HIV drug Darunavir for treating patients afflicted with the novel coronavirus.

A research group led by Li Lanjuan, a member of the Chinese Academy of Engineering and expert with the National Health Commission, said Arbidol was tested to be able to effectively inhibit coronavirus in vitro.

Li advised adding the combination into the sixth version of the commission's treatment guidelines.