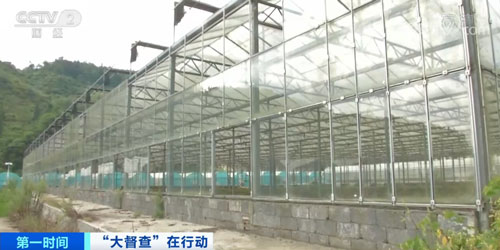 An agricultural park project in Southwest China's Guizhou Province, which was originally intended for poverty alleviation, has recently been found to have been inactive for over five years. (Photo: CCTV)

An agricultural park project in Southwest China's Guizhou Province, which was originally intended for poverty alleviation, has recently been found to have been inactive for over five years, resulting in a loss of 8,620,000 yuan ($1,335,000) and leaving a large amount of farmland deserted, an inspection team of the State Council, China's cabinet, recently revealed.

Liu Yue, a member of the inspection team, said that when the local government first allocated the funds to the company in charge of the project, it did not allocate the grant in phases or steps. After the funding was in place, the specific usage of the funds was left unattended, and local authorities did not effectively monitor the situation.

"As we asked relevant departments about the project, they said they knew nothing about the whereabouts of the grant," Liu said in the CCTV report.

The inspection team is now undertaking a more thorough examination into the case, and if any kind of impropriety is discovered, punishments will be handed out in accordance with the law.

The case has triggered outrage among Chinese netizens. "Please make sure that poverty alleviation across the country is properly implemented and benefits the people," a netizen urged. "We support and appreciate the efforts to lift countless places out of poverty, but it should never be flamboyant or formalistic."