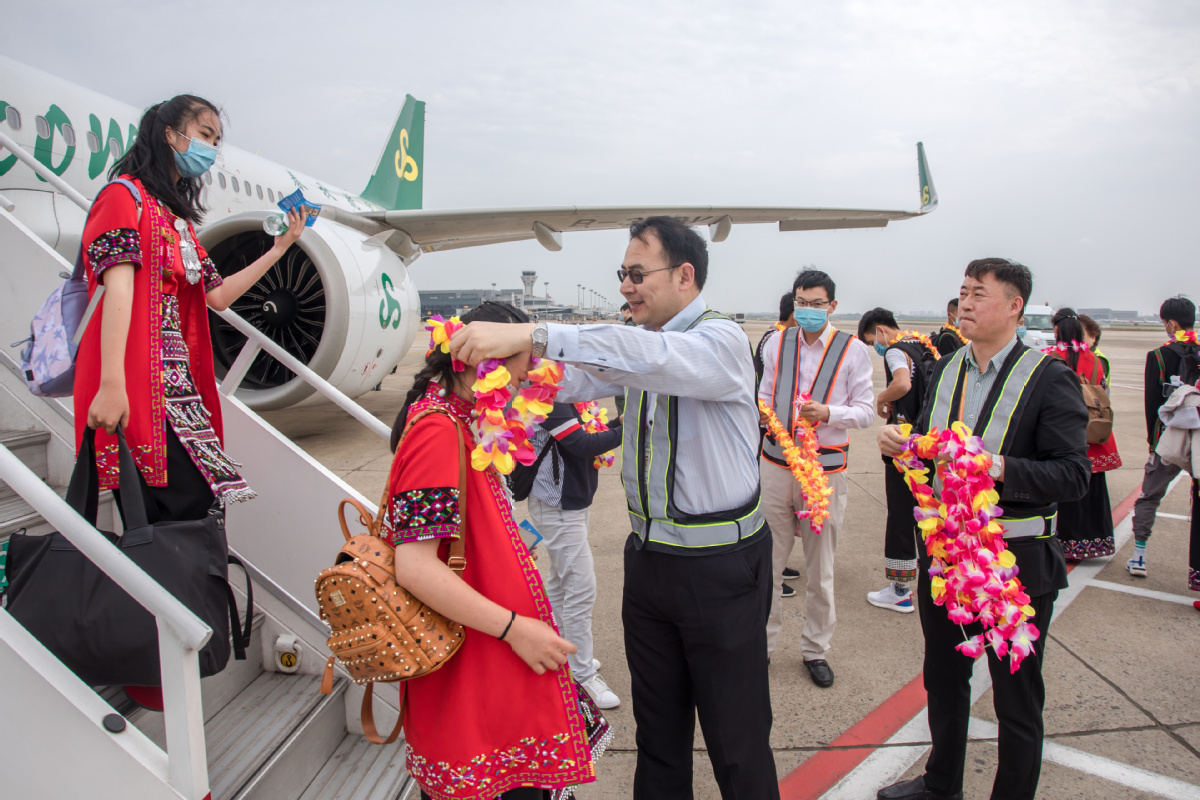 Trainees who will take part in a special education program to become flight attendants are greeted after arriving in Shanghai from Yunnan province on May 14. PROVIDED TO CHINA DAILY

When 18-year-old Li Shunzhen took her first flight from Yunnan province to Shanghai on May 14, it was a journey that cemented what she wanted to do with her life.

"I was a bit nervous at the beginning," said Li, who is from the Hani ethnic group. "When the aircraft took off and started to fly I felt so excited. I heard how good the flight attendants' Chinese and English are, so I decided to work hard to become one of them."

Li was on her way to take part in a special education program to turn poor villagers into flight attendants. It will take her three years to become a qualified air stewardess under a joint program launched by the budget carrier Spring Airlines and Shanghai Open University.

Li and her 17 classmates are from the Honghe Hani and Yi autonomous prefecture in Yunnan, and the program was instigated as a poverty alleviation initiative.

"Our goal is that the employment of one member will pull the whole family out of poverty," said Wang Yu, chairman of Spring Airlines, which has its headquarters in Shanghai.

High school graduates ages 16 to 22 from the prefecture's most impoverished counties, Jinping, Lyuchun and Honghe, are eligible to apply for the program. Those accepted into the program have their two and a half years of tuition paid for, and are provided with free lodgings by the Air Transport Institute of Shanghai Open University.

Spring Airlines provides them with a one-way air ticket to attend university in Shanghai.

The special education and skills training program is designed to help combat poverty in the autonomous prefecture, and aligns with the nation's goal of shaking off poverty by the end of this year. "The course schedule is very tight, and we have so much to learn. I want to try my best to complete the course and play my part in this exciting era," Li said.

Her classmate Xu Xiao said: "This program offers a clear career route for me, and I am really looking forward to the day of working in the sky."

Before joining the program, Xu studied at a local university, majoring in broadcasting. "I was a bit confused about my future at that time, having no idea what I could do after graduation. What's more, the tuition fee was really a heavy burden for our family," she said.

When Xu's older sister told her about the flight attendant opportunity, she decided to try the training program. Spring Airlines and Shanghai Open University initiated the education and skills training program in January. A total of 18 high school graduates passed the interviews in Honghe in April, including 17 from the Hani.

Wang said a similar training program was launched in 2018 for students from the prefecture, but without the tertiary studies component. Based on the initial success, Spring Airlines joined with Shanghai Open University to launch this latest program to alleviate poverty, Wang said.

The first batch of 32 flight attendants from Honghe have worked for Spring Airlines for more than six months.

Even during the height of the COVID-19 outbreak, when many flights were canceled, the low budget carrier did its best to maintain the workload of the employees, so their average monthly salary remained about 8,500 yuan ($1,200).

Li said the average monthly salary of a flight attendant is the equivalent of her family's annual income. Although it will take three years before she can earn a salary, she is already planning to use it wisely.

"I want to take my parents to see the world, and I also want to do something for my hometown," Li said.

Li Huixin is from the first batch of flight attendants from Honghe prefecture. She had previously planned to find a job in her hometown after graduating from a college in Yunnan. Li Huixin learned from WeChat that Spring Airlines was recruiting flight attendants in September 2018, and decided to give it a try.

After she passed the final round of interviews, Li Huixin arrived in Shanghai for the four-month training program in December 2018.

She said she was pleased to become a flight attendant as it was a job she had wanted since she was a little girl. "As my dream has come true, I want to send my sincere wishes to my younger schoolmates. I hope to fly with them in the near future," Li Huixin said.

Yuan Wen, principal of Shanghai Open University said, "By offering this education opportunity we hope each of them makes the best of it to meet the expectations of their families."

Yuan added the graduates could realize their personal potential.