URUMQI, July 26 (Xinhua) -- Sitting in her spacious new home in a community called "happiness," Gulnur Yusup is quite content with her life. 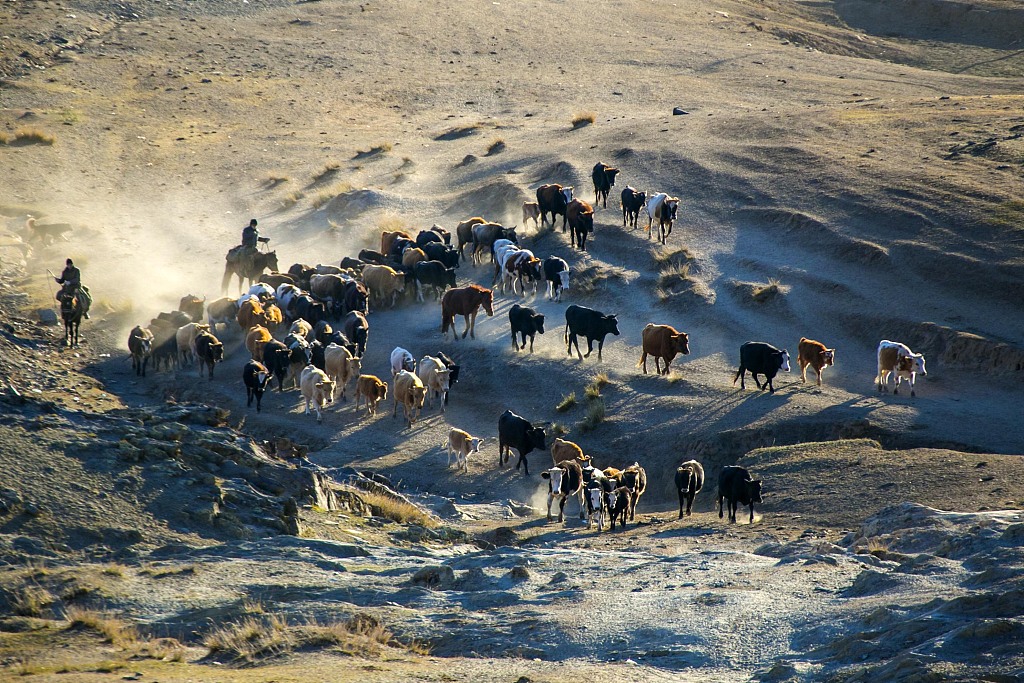 "I never imagined living in a big house like this," said the mother of three. "Without the government relocation program, my family would probably still be herding sheep in the mountains."

For Gulnur, her life as a herdswoman is not a distant memory. Barely three years ago, her family was still leading a nomadic life in the mountainous county of Wuqia in Kizilsu Kirgiz Autonomous Prefecture, located in the far west of northwest China's Xinjiang Uygur Autonomous Region.

They had to move from place to place to wherever there would be water and grass for sheep and cattle, just as their ancestors of Kyrgyz ethnicity have done for centuries. Their income came solely from herding and barely met their basic living needs.

Gulnur recalled that her family's old house was generally dilapidated -- the roof would leak when it rained, and the lack of heating made the freezing winters on the Pamir Plateau especially hard to bear.

But what concerned Gulnur most in those days was her children's education, as they had to travel more than 30 km on bumpy roads to the nearest primary school.

"When the county government launched the relocation project in 2016, we were more than glad to move down the mountain," she said.

Gulnur's family, along with 135 households of Kyrgyz herders, moved to a resettlement site in Baykurut Village near the China-Kyrgyzstan border that year. Each family was granted an apartment with central heating, gas, tap water and cable TV.

Gulnur decorated the new apartment with bright-colored Kyrgyz-style carpets and tapestries. On the walls of her living room hang a whip, a Kyrgyz-style fur hat and a "komuz," a traditional Kyrgyz string instrument.

"All the decorations are reminders of our Kyrgyz traditions," Gulnur said.

The resettlement site, called "Happiness Community," is also equipped with all sorts of infrastructure including a clinic, a kindergarten, a primary school and an activity center.

Now Gulnur's youngest son only needs to walk for 10 minutes to attend classes at the primary school, which provides free meals and boarding for all its students.

Besides better living conditions, the relocated families were also offered free sites to start their own businesses.

The families mainly run restaurants and grocery stores to serve a large number of tourists visiting the area and truck drivers transporting goods across the national border, according to Tangnur Ahun, Baykurut's village chief.

However, Gulnur preferred to be a full-time housewife and leased her store to a fellow villager, which brings in about 12,000 yuan (1,745 U.S. dollars) for her family a year. Gulnur's husband now works in a nearby warehouse and earns more than 3,000 yuan a month.

"Our life has never been better. I would never think about returning to the old lifestyle," Gulnur said.

The Kyrgyz herder families are not an exceptional case in Xinjiang. To fulfill the mission of eradicating absolute poverty by 2020, the region has been helping impoverished farmers and herders move from mountainous regions and desert hinterland to resettle in plains and oases.

The regional authorities said that as of the end of 2018, a total of 140,000 poverty-stricken people in the region were relocated. Another 21,000 people will be relocated this year.