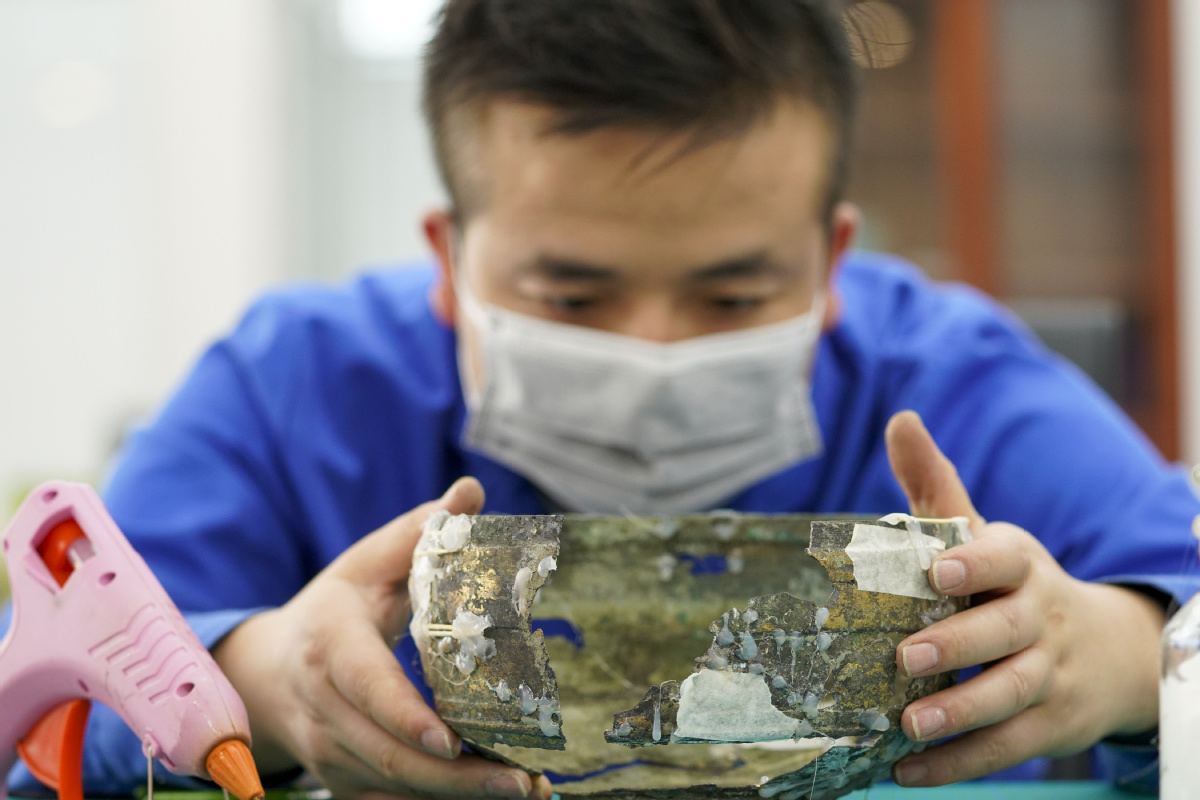 A restorer works on a Han Dynasty (206 BC－AD 220) bronze at a relic preservation center in Chongqing on Wednesday. (Photo: Xinhua)

A key conservation center for cultural relics discovered in the Three Gorges, or Sanxia area, opened on Friday in Chongqing in Southwest China.

Located on the Yangtze River, the Three Gorges Dam is one of the world's biggest hydroelectric power stations, and the surrounding area is rich in history. The opening of the institute, officially known as the Sanxia Conservation Institute, was a highlight of this year's Cultural and Natural Heritage Day.

Since 2006, the second Saturday in June has been given over to the celebration and as this year's main venue, Chongqing marked the nationwide day through special symposiums and exhibitions, among other activities.

Construction of the new institute, which covers an area of 8,400 square meters, cost 160 million yuan ($25 million). It contains the country's leading restoration facilities, as well as hi-tech laboratories to prevent or reverse the deterioration of artifacts. Digitization and the development of new conservation technologies are also key to the institute's daily work. It is staffed by more than 40 experts, the first researchers to be regularly stationed there.

"It will become one of the country's key hubs for the conservation of cultural relics, and will greatly improve the capacity of the entire sector in Southwest China through the adoption of new technologies, "said Guan Qiang, deputy director of the National Cultural Heritage Administration. "In the new era, technology is key to the sustainable development of the protection of cultural heritage."

According to Yuan Quan, head of the Sanxia Conservation Institute, over 7,000 archaeologists and conservators from some 200 research institutes and universities participated in the decadeslong program to protect cultural relics in the Three Gorges region, and hundreds of thousands of workers took part in the protection of archaeological sites.

"It is one of the biggest preservation programs of cultural artifacts in the world," Yuan said. "The conservation institute meets the urgent need for the protection of relics unearthed in the Three Gorges region."

According to Xing Jun, deputy director of Chongqing's Cultural Heritage Administration, who delivered a keynote speech at a symposium on Saturday, over 143,000 cultural relics were unearthed from 541 archaeological sites in the reservoir area during construction of the dam between 1992 and 2010.

Since construction ended, follow-up archaeological excavations have been regularly carried out, mainly during months when the water level is lowest. A total of 62 archaeological projects have either already been completed or will be launched by 2025. In addition, 117 cultural heritage sites above the ground have been included in the ongoing schedule.

In Chongqing, nearly 1.7 billion yuan has been spent over the past three decades on research and conservation of Three Gorges-related cultural relics and heritage sites.

Xing revealed that the city will undertake comprehensive research into cultural resources throughout the Three Gorges area during the period of the 14th Five-Year Plan (2021-25). The municipality will also cooperate with nearby Hubei province to set up an archaeological park and a detailed plan for the conservation of cultural relics over the next three years is being drafted, thanks to the establishment of the new institute.

"Achievements in protecting relics have to benefit the public," Xing said, adding that a database of artifacts is being compiled, and that more thematic exhibitions are on the way.

The new institute also functions as a hub for education. It is accessible to the public, allowing visitors to enjoy a close view of ongoing restoration projects.

More academic exchanges with research institutions and universities are expected, which will permit the new facility to contribute to the bigger historical picture. He Yun'ao, a professor at Nanjing University, also pointed out that the conservation and study of cultural relics along the Yangtze River will help modern society better absorb the cultural legacy of this key economic zone.