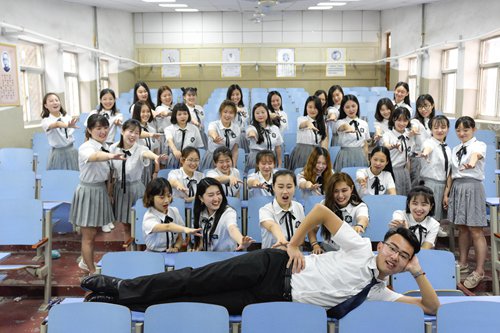 In Shandong Province, sons have been traditionally prized more than daughters. In this creative graduation photo, 36 female students pose with their only male classmate at Liaocheng University in Liaocheng, East China's Shandong Province. (Photo: IC)

Twenty-eight-year-old Qin Chun is the only boy in his family. He has five older sisters, with a 22-year gap between him and the eldest.
Qin comes from a small village in Heze, East China's Shandong Province, and his birth fulfilled his father's persistent wishes to have a son.
Over the years, Qin has been the center of his family, which made huge sacrifices for him. His two sisters even dropped out of school so that the family could pool their resources to send him to college.
"If my father had not insisted on having a boy, my sisters might have lived a happier life. I feel ashamed for their sacrifice and grateful for their tolerance. Now the only thing I can do is to compensate them as best as I possibly can," Qin told the Global Times.
In rural Shandong, many parents consider their son as the family's backbone and pin great hopes on him to carry on the family lineage. Couples who have no sons may consider adopting their relatives' children. The sin or indignity of not having a son may even motivate some couples to buy a boy from human traffickers, which created a market for baby boy sales.
Not enough girls
According to a report published by The Beijing News on June 30, police in Feixian county, Shandong have arrested 11 suspects from Shandong and Shanxi provinces for trafficking children in June 2017.
The report said Li Yunsheng, from Chahe village in Feixian county, had bought six baby boys from Liu Wenhui and another woman who live in Daixian county, Shanxi. He then sold the babies to six people and earned 28,000 yuan ($4,224).
The report said that early in 2014, the People's Court of Feixian County publicized 11 cases of child abductions involving 23 children, mostly from Sichuan and Shanxi provinces.
A villager from Daixian county told the reporter that human traffickers had "collected" children here 30 years ago and sold them to Shandong. "Those who gave birth to children but could not afford to or did not want to raise them would sell their babies at the price of 40,000 to 50,000 yuan each," said the villager.
Experts said it is hard to eradicate child abduction unless the traditional preferences for sons in rural areas change.
Guo Shuqing, then Shandong provincial governor, said in a 2015 work report that the sex ratio imbalance was very serious with some places exceeding 120 boys to 100 girls. An insider even disclosed to the Global Times that the situation is much worse in some rural areas, with the ratio reaching 140 boys to 100 girls.
According to the United Nations, the normal sex ratio ranges from 102 to 107 boys for each 100 girls.
However, Yi Fuxian, a research fellow at the University of Wisconsin-Madison and author of the non-fiction book A Big Country in an Empty Nest, noted that Shandong is not the place with the highest sex ratio imbalance. East China's Jiangxi Province ranks first with a ratio of 131:100, followed by Central China's Henan Province at 127:100.
The imbalance will lead to a bachelor crisis, a credit crisis and social instability, said Yi.
Preference for sons
The people of Shandong, the country's second-largest province in terms of population, are known for their patriarchal tradition of preferring sons.
Random interviews conducted by the Global Times of Shandong residents found that it is not unusual that local parents gave birth to many children until they finally get a son. Many of them said frankly that it is a "local custom."
"Some poor families would flee to other provinces [to avoid fines], while rich families solved the problem by paying a large sum of money. Some families even registered their daughter's household information under their relatives' names," a Beijing resident surnamed Shang, 29, from Zibo, Shandong, told the Global Times.
Residents in Shandong have been deeply influenced by Confucius culture, which deems that only a boy can carry on the family line. This has for a long time meant that "it is a sin for women not to give birth to a boy," said Shang.
Another Shandong resident surnamed Geng told the Global Times that previously, in rural villages, women were not allowed to eat with men at the table. But nowadays things have changed.