Starting Sunday, women early in their pregnancy who are not yet showing will get special treatment on Tianjin's subways by wearing "pregnancy badges" given by the city's transportation unit. 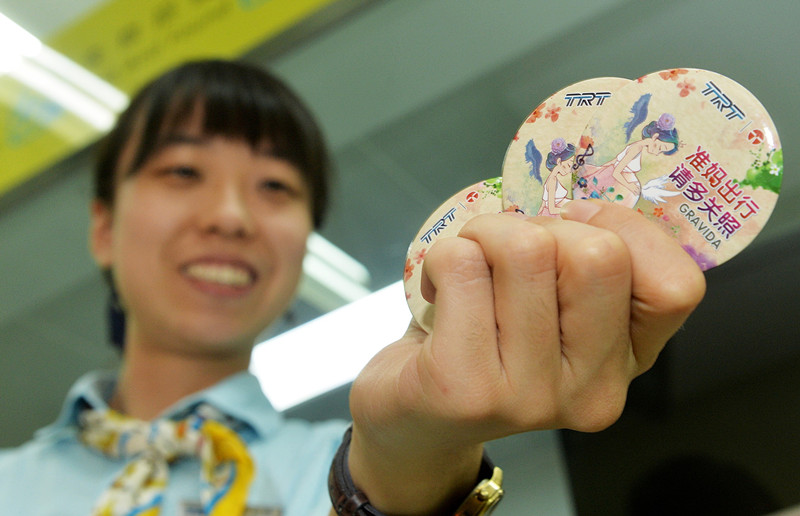 A subway worker shows a pregnancy badge in Tianjin on Sunday. (Photo/China Daily)

The free badges, which pregnant women can apply for at subway stations, allow staff members to offer mothers-to-be more help when necessary.

"It will help subway staff notice those special passengers more easily to give them preferential treatment," said Pang Jinshuang, deputy head of the Tianjin subway's passenger transport department. "Our security staff will give them a hand inspection instead of an electronic search to prevent radiation, which most pregnant women worry about."

Meanwhile, pregnant women will be invited to use the "green channel" provided by the subway during rush hour.

"During the first three months that I was pregnant, I seldom asked other people to give me a seat because my belly was not obvious," said a woman in Tianjin who gave only her surname, Wang. "It's a bit awkward for me to ask others to do me a favor on public transportation."

She said others give her a seat now when they see her wearing the badge, "and now it seems much safer when I take the subway".

Zheng Yang, mother of a 1-year-old girl in Beijing, said one time she took the subway during her pregnancy she suddenly felt dizzy and had difficulty breathing. However, it was not easy to notice that she was pregnant, so no one offered to help.

She struggled out of the car at the next stop and sat on the floor and breathed deeply until a member of the subway staff came to help.

"It could have become dangerous if my condition was any worse, because my doctor had told me not to go to crowded places," she said. "But sometimes, I had to take the subway when it was too hard to get a taxi. I hope the Beijing subway will have badges too. It's not too hard to do."

In other provinces, some women-only buses have been set up.

For example, Zhengzhou, Henan province, began operating two buses in 2016 for women during rush hour, hoping to protect them from sexual harassment and provide more space for those who are pregnant.

"The number of pregnant women has increased since the country began allowing all families to have two children. Our service should be improved to meet their needs," said Kong Chaoping, who initiated the special bus service.