TIANJIN, Sept. 20 (Xinhua) -- Chinese Premier Li Keqiang on Thursday held a dialogue with representatives from communities such as industry and commerce, finance, think tanks and media outlets attending the Summer Davos 2018 in Tianjin. 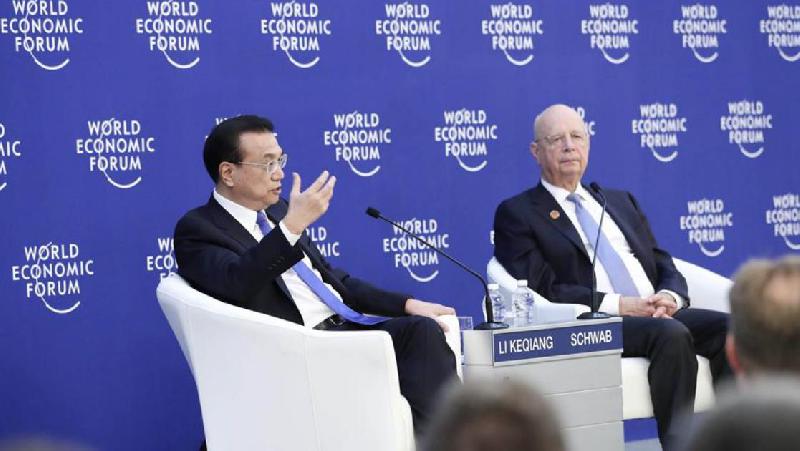 At the dialogue, hosted by Klaus Schwab, executive chairman of the World Economic Forum, Li responded to questions about China's financial opening-up, intellectual property rights (IPR) protection, tax and fee reduction, entrepreneurship and innovation, as well as the reform of the world trade system.

Over 200 representatives from Europe and countries including China, the United States and Japan attended the dialogue.

Li said the opening-up of the financial sector of a nation was closely related to its development phase, economic level, and regulatory capacities.

With regard to tax and fee reduction, Li said, China saw an increase of tax revenues from the second half of 2017 to the first half of 2018, which indicates a steadily growing Chinese economy.

In the first half of this year, the profits of industrial enterprises increased by 15 percent, and there was a drastic rise in the number of market entities and sources of taxes.

As the effects of tax reduction policies started to kick in at the beginning of the second half of 2018, growth in the tax revenues of central and local governments have both been reduced.

"For the next step, we are going to reduce taxes and fees on a grander scale, including cuts in social security fees, which will unburden enterprises and facilitate their development," he said.

Special deductions of personal income tax should be implemented evenly and conveniently to elevate the purchasing power of residents. The government shall practice austerity, refrain from disturbing enterprises and help people live a better life, he noted.

In terms of entrepreneurship and IPR protection, Li said that fostering an innovative society needs to unleash the creativity of everybody.

A series of measures have been taken to ensure everyone enjoys equal opportunity in innovation, to inspire large enterprises to develop their own makerspaces and to welcome the participation of foreign entrepreneurs in China's development.

Last year, Chinese companies took the lead in their spending on foreign patent licensing fees and royalties, he noted. "We will not allow any forced IPR transfer."

Regarding the reform of the world trade system, Li pointed out that, under the current situation, the foundation of the multilateral trade rules has been shaken by rising protectionism.

"The multilateral trading system and its rules, with the World Trade Organization (WTO) at its core, have been established through joint consultation based on the goal of maintaining free trade. Although reform is necessary and needed in the WTO, it doesn't mean creating a new system.

"The goal of trade liberalization shall not change. We need to accommodate the interests of developing countries, especially those of the least developed countries. We should discuss and deal with issues together so that everyone can benefit," Li said.