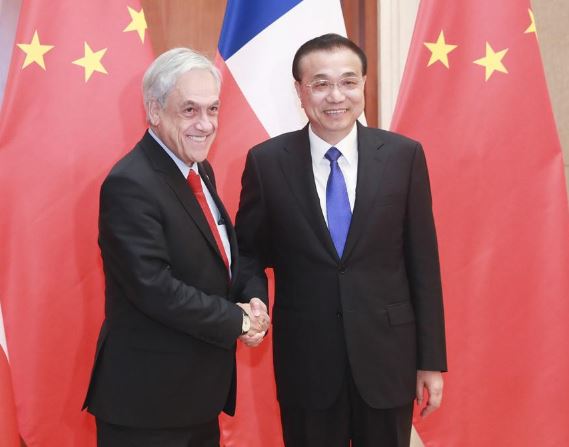 BEIJING, April 24 (Xinhua) -- Chinese Premier Li Keqiang met with Chilean President Sebastian Pinera on Wednesday ahead of the Second Belt and Road Forum for International Cooperation to be held from April 25 to 27 in Beijing.

The bilateral trade between China and Chile grew last year against the backdrop of a global slowdown, which showed the great potential for cooperation between the two countries, Li said.

China and Chile should take joint pursuit of the Belt and Road Initiative (BRI) as an opportunity to align the two countries' development strategies, upgrade the China-Chile Free Trade Zone, and expand cooperation in areas including transportation infrastructure, electricity, agriculture, mining and innovation, he said.

China is willing to import more high-quality products from Chile, take full advantage of digital economy platforms such as e-commerce and deepen economic and trade cooperation with other Latin American countries with the help of the China-Chile Free Trade Zone, pushing forward the overall relations and cooperation between China and Latin America, he said.

Pinera said the BRI has injected new vitality into the millennia-old Silk Road and Chile is willing to support the joint pursuit of the Belt and Road Initiative.

The two sides have completed the upgrading of the bilateral free trade agreement and Chile will take this as an opportunity to promote cooperation in various areas and bring about greater progress in the bilateral comprehensive strategic partnership, he said.