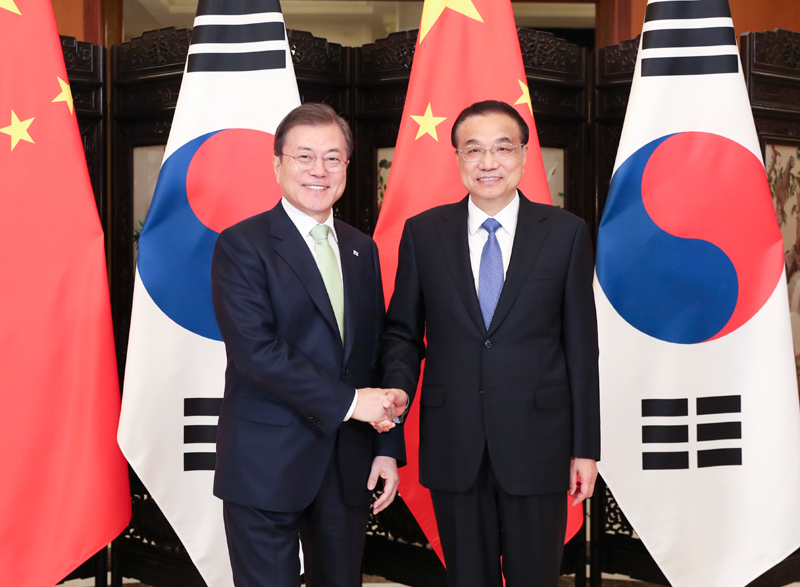 Noting that China and the ROK are important neighbors and trading partners, Li said the two countries have enjoyed rapid development in their relations since they established diplomatic ties, and the trade volume between the two countries exceeded 300 billion U.S. dollars last year.

Both China and the ROK share similar culture and have a long history of exchanges, said Li, adding that China attaches great importance to ties with the ROK and stands ready, from an overall and long-term perspective, to work with the ROK to enhance mutual political trust, boost mutually beneficial cooperation, expand people-to-people and cultural exchanges, and promote the sustained and healthy development of bilateral relations, which is critical to securing peace, stability, development and prosperity in not only China and the ROK, but also Northeast Asia.

China is willing to uphold an open and inclusive attitude to strengthen the alignment of development strategies with the ROK, actively discuss carrying out cooperation in third-party markets, technological innovation and the service industry, and deepen cooperation in addressing climate change and environmental protection to better achieve win-win results.

This year marks the 20th anniversary of China-Japan-ROK cooperation.

Li stressed that China is ready to work with the ROK and Japan to promote trilateral cooperation, safeguard multilateralism and free trade, and in particular, facilitate the signing of the Regional Comprehensive Economic Partnership (RCEP) at an early date and promote concrete progress in the China-Japan-ROK free trade agreement negotiations, thus sending a positive signal to the region and the world.

Moon, who is in China to attend the 8th China-Japan-ROK leaders' meeting, applauded the political, economic and cultural achievements China and the ROK have made since they established diplomatic relations, saying the two countries have achieved common development and made contributions to peace and the development of Northeast Asia and the world.

Against the background of downward pressure on the world economy and rising uncertainties, Moon said he was in complete agreement that all parties should join hands to address challenges.

Moon said the ROK is ready to work with China to strengthen the synergy of development strategies, promote third-party market cooperation for early achievements, cement people-to-people exchanges, and enhance cooperation in sports, culture and tourism.

The ROK stands ready to work with China to promote the signing of the RCEP as soon as possible and take concrete steps to safeguard free trade, he said.