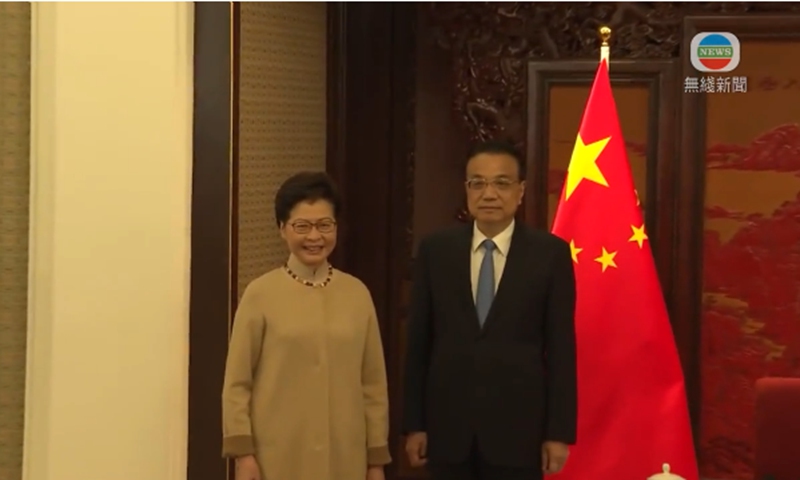 Over the past year, Lam led the HKSAR government to implement policies steadily, fighting the COVID-19 epidemic effectively and boosting economic recovery, and the central government fully recognized her work, Li was quoted as saying in Hong Kong media reports on Wednesday.

The central government will continue fully implementing "one country, two systems" and "Hong Kong people governing Hong Kong" as the city will continue to enjoy high autonomy while improving relevant responsibilities that the HKSAR needs to carry out in line with the Constitution and the Basic Law by fully supporting the chief executive for the local governance, the premier said.

Lam is scheduled to pay a duty visit to Beijing from Monday to Thursday to "brief state leaders on the latest economic, social and political situation in Hong Kong," according to a press release on the HKSAR government's website on Monday. This would also be the last duty visit of Lam in this term as chief executive. The upcoming election for a new chief executive of the HKSAR is set to be held in March 2022.

Lam also said that she is very happy to come to Beijing for the duty trip personally, and appreciated Li's recognition of her work. When Lam did the last duty briefing on January 27, Hong Kong was experiencing the fourth wave of COVID-19 outbreak, and Li told her that the first priority was to contain the outbreak.

"I'm happy to report that Hong Kong has not seen any domestic infection in over two months," she said.

As the latest successful Legislative Council election unveiled a new page for the city for effective governance with the patriots-only principle, Li said Wednesday that the central government unswervingly supports the city's future development, expecting that the city will integrate into the national development plan will provide a larger room for its growth as an international financial hub, trade hub and shipping hub.

A number of senior officials were present at Wednesday morning's briefing, including Vice Premier Han Zheng, State Councilor Wang Yi, Minister of Public Security Zhao Kezhi, Xia Baolong, vice chairman of the National Committee of the Chinese People's Political Consultative Conference and head of the Hong Kong and Macao Affairs Office of the State Council, and Zhang Xiaoming, deputy director of the office, as well as Luo Huining, head of the liaison office of the central government in Hong Kong.