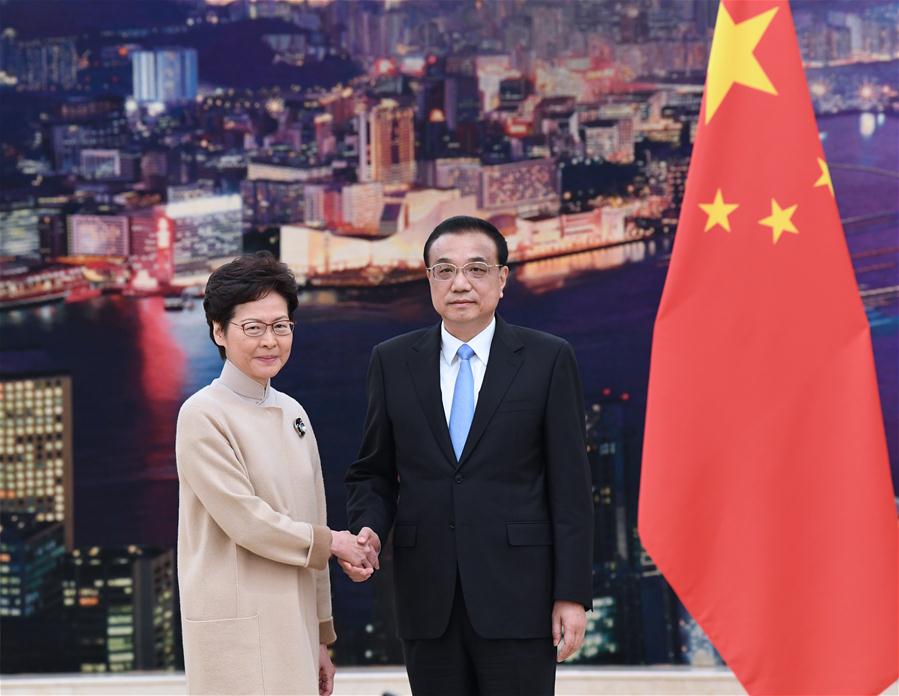 During the meeting, Li heard a report on the situation in Hong Kong and the SAR government's work.

Lam's duty trip to Beijing this year has drawn wide attention, as the disturbances in Hong Kong have damaged the society in many ways, he said.

"The central government will continue to resolutely implement the 'one country, two systems' principle, resolutely support you as the chief executive in leading the SAR government to govern in accordance with the law, and resolutely safeguard Hong Kong's long-term prosperity and stability," Li told Lam.

Currently, the economy of Hong Kong is experiencing an obvious decline, with many industries suffering heavy blows, Li said.

In the face of this unprecedented grim and complex situation, Lam has led the HKSAR government in sparing no efforts to maintain social stability and rolling out a series of measures to aid enterprises and ensure employment, Li said, praising Lam and the HKSAR government for "rising to the challenges and doing a lot of difficult work."

Li said the central government fully acknowledges the efforts made by Lam and the HKSAR government.

Noting that Hong Kong is still facing difficulties, Li said the HKSAR government should make continuous efforts to bring the violence and chaos to an end in accordance with the law and restore order.

Li also urged the HKSAR government to intensify efforts to address deep-rooted issues in the economic and social development of Hong Kong so as to ensure lasting prosperity and stability in the region.

Lam said the past year has been a grim year for Hong Kong's politics, economy and society, and the SAR government has adopted a series of measures to restore order, support businesses and mitigate difficulties for the people.

Lam expressed gratitude to the central government for its support for Hong Kong.

The SAR government will keep developing the economy and improving people's wellbeing, take part in the development of the country, expand international cooperation and consolidate Hong Kong's position as an international financial, trade and shipping center, said Lam.