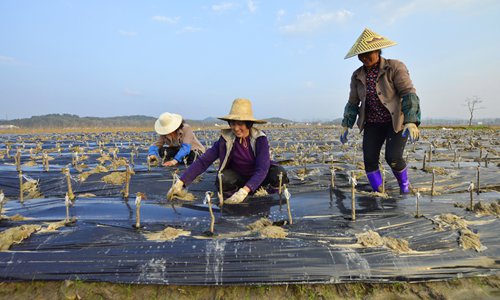 Members of the 13th National Committee of the Chinese People's Political Consultative Conference (CPPCC) have been focusing their attention on the issue of poverty alleviation after Premier Li Keqiang delivered the government work report at the first session of the 13th National People's Congress (NPC) on March 5.According to the report, the government aims to bring over 10 million people out of poverty in 2018, boosting the drive by promoting industry, education, health and ecology.More than 68 million people have been lifted out of poverty in the last five years, cutting the proportion of the population living in poverty from 10.2 to 3.1 percent, said the report.From 2013 to 2017, the central government allocated 280 billion yuan ($44.3 billion) in special funds for poverty alleviation.Jackie Chan, CPPCC member and film actor, appealed to all actors and artists to assist the government in alleviating poverty after a panel discussion of the first session of the CPPCC National Committee.Charity is not a simple thing, said Chan, explaining that it is difficult for individuals to help people in need without government approval. Thus, "We, including young actors, can follow the government's activities and take our own responsibility."The world famous actor also suggested that celebrities help carry out free promotions for cities, villages and towns in need. "I used to do free advertisements for one impoverished place to sell their tea, which ended up seeing big sales that year," said Chan.Help from techTechnology is also being widely used to help reduce poverty. Sun Junqing, head of the Department of Science and Technology (Intellectual Property Office) of the Inner Mongolia Autonomous Region, told the Global Times that the region had already helped with poverty alleviation through innovative tech support, bringing about new agricultural achievements and cultivating industry.Moreover, they have boosted technology and science education in rural areas to "inject new power into poverty alleviation," said the science department head.Sun Libin, a member of 13th CPPCC National Committee and chairman of Linkage Group, highlighted the importance of developing industry and increasing employment to help reduce poverty. "Solving unemployment by promoting industry is the best charity," he said at a panel discussion on Monday. "To lift people out of poverty, we shouldn't directly give money," said Sun. "We must help them with industry and link them to our platform, and resolve product marketing problems for them."Social organizations should dedicate themselves to poverty alleviation, but without relying solely on the government, said Wang Haijing, vice chairman of the Red Cross Society of China (RCSC) and CPPCC member.Wang also called for attention to be paid to those who are thrown back into poverty because of natural disasters. "For example, if a flood destroys a household, it could suffer poverty again," explained the RCSC head.Essential educationWang insisted that poverty should be alleviated through education, and poor people need to earn a living with their own hands.Sun said his company has launched several projects to aid primary schools in provinces including Yunnan, Sichuan and Shaanxi, as the most difficult problem facing poverty-stricken areas is a lack of good teachers. "Teaching resources are what these primary schools really need," said Sun, adding that the company planned to launch a project to help thousands of teachers in poverty-stricken areas. Providing Chinese Mandarin, or putonghua, training also helps lift young people in impoverished regions out of poverty, said Hai Xia, another CPPCC member and also a host on China Central Television (CCTV).Chen Fang, CPPCC member and chairman of Sichuan Province's Federation of Industry and Commerce, appealed for the further promotion of railways in impoverished areas, especially the Sichuan-Tibet railway.Express railways are another path to poverty alleviation, according to Chen. "Daliangshan in Sichuan, for example, still suffers from rundown roads, making the area hard to reach."William Ding Lei, CEO of NetEase and CPPCC member, encourages the sharing of cases where villages have developed successfully. China's villages are not lacking in good products, but the government should provide endorsements to give people a greater sense of security. Ding added that in order to develop the rural economy, the government should build a quality and safety system for agricultural products.