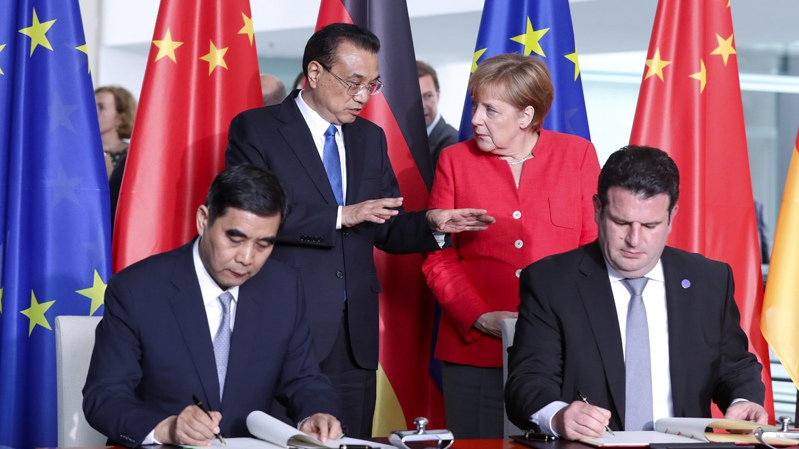 Chinese Premier Li Keqiang wrapped up a six-day visit to Bulgaria and Germany on Tuesday. During the trip, Li voiced China's resolute support for a united Europe and free trade and globalization, as well as his country's commitment to reform and opening-up.

Li arrived on Thursday in the Bulgarian capital Sofia, where he attended the seventh summit of heads of government of China and (16) Central and Eastern European (CEE) countries. In Berlin, he co-chaired the fifth round of China-Germany intergovernmental consultations with German Chancellor Angela Merkel.

Commenting on China's cooperation with the 16 CEE countries, Li said the two sides would like to see a "united, open and prosperous European Union" and "further advancement of the integration process of Europe."

The "16+1" cooperation will help some CEE countries fulfill their aspiration to join the EU, a move which will promote balanced development of the continent, said the Chinese premier.

Among the CEE countries, 11 are EU members and the other five are either applying for EU membership or intend to join the bloc. The "16+1" cooperation will help the five non-EU countries meet the criteria for the EU and the Eurozone at an early date, according to Li.

China and Europe have been engaging in frequent high-level exchanges since the beginning of the year, as leaders of France, Britain, Germany, Austria and Russia have visited China. On July 16, Li will co-chair the 20th China-EU leaders' meeting with European Council President Donald Tusk and president of the European Commission Jean-Claude Juncker in Beijing.

The interactions highlight China's increasingly close ties with different parts of Europe amid growing unilateralism in the United States.

Another strong signal sent by Li was Beijing's support for free trade and globalization, which was echoed by his European counterparts. In Sofia, he pledged that China will import more agricultural products from CEE countries. In Berlin, he called for increased efforts to promote free trade and oppose protectionism.

At the fifth round of China-Germany intergovernmental consultations, the Chinese premier said that with rising unilateralism and trade protectionism, the fruitful cooperation results reached between China and Germany proved that free trade will give a strong boost to the economic recovery of both countries, and even the whole world.

"Market segmentation and unilateralism do not conform to our principles, and are neither in line with our expected future nor the progress of human civilization," he said.

China and Germany, both major economies, should deepen bilateral and multilateral cooperation to send positive signals of supporting free and fair trade and safeguarding a fair and just international order, Li stressed during his talks with Merkel.

The German chancellor emphasized Berlin's opposition to trade wars, adding that rule-based free trade should be maintained. Germany is ready to work jointly with China to send positive signals of promoting multilateralism and international cooperation, she said.

Liu Mingli, deputy director of the China Institutes of Contemporary International Relations, told CGTN that it is very important that China and Germany have reached a consensus to "deal with protectionism together."

"Protectionism is so strong that no single economy can deal with it," Liu said. "So the consensus between major economies is very important, which can send a signal for other economies to work together with the possibility to deal with protectionism."

This year marks the 40th anniversary of the beginning of China's reform and opening-up policy. In his speech at the opening ceremony of the eighth China-CEE Countries Economic and Trade Forum, Li said the policy is essential for China's remarkable achievements in the past decades, vowing that the country will "stay on the path of reform and opening-up."

China will continue to transform government functions and adjust the roles of the government and the market to ensure that the market plays a decisive role in allocating resources, he noted.

Addressing a bilateral forum on economic and technological cooperation between China and Germany, Li pledged that China will stay committed to continuously expanding opening-up so as to better cope with unilateralism and protectionism.

China welcomes Germany to seize opportunities brought by the new round of its reform and opening-up, Li said during his joint press conference with Merkel.