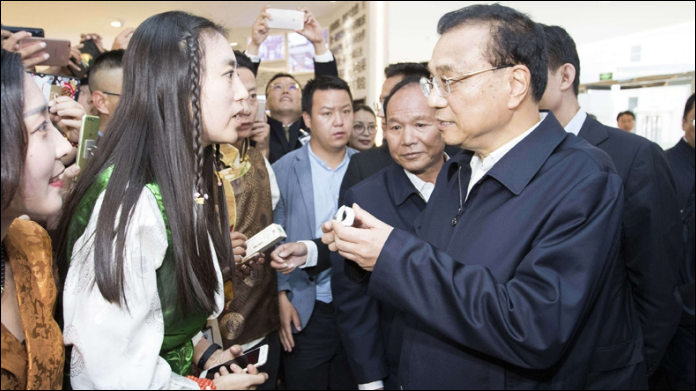 Chinese Premier Li Keqiang held a cordial conversation on Friday with more than 100 Tibetan entrepreneurs at the demonstration base of mass entrepreneurship and innovation during his inspection tour in Tibet Autonomous Region.

"I did not expect such strong innovative power can be found on the snowy plateau," the premier lauded, adding his hope that the base could attract more people to start businesses that inject new vitality and new innovative energy into Tibet's development.

Li has always been concerned about the development of the mass entrepreneurship and innovation initiative since he proposed it at the 2014 Summer Davos.

The initiative not only refers to being innovative in the fields of technology, commerce, and culture, its essence lies in the innovation of ideas and systems.

Besides the demonstration base, Li also inspected the Potala Palace, the Tibet Autonomous Region People's Hospital, and medical institute.

He also came to the junction of Yarlung Zangbo River and Nyang River to inspect the water resources and ecological conservation.

"Great efforts should be made to conserve Tibet’s water resources and build Tibet an ecologically civilized plateau while promoting its social progress," Li said.