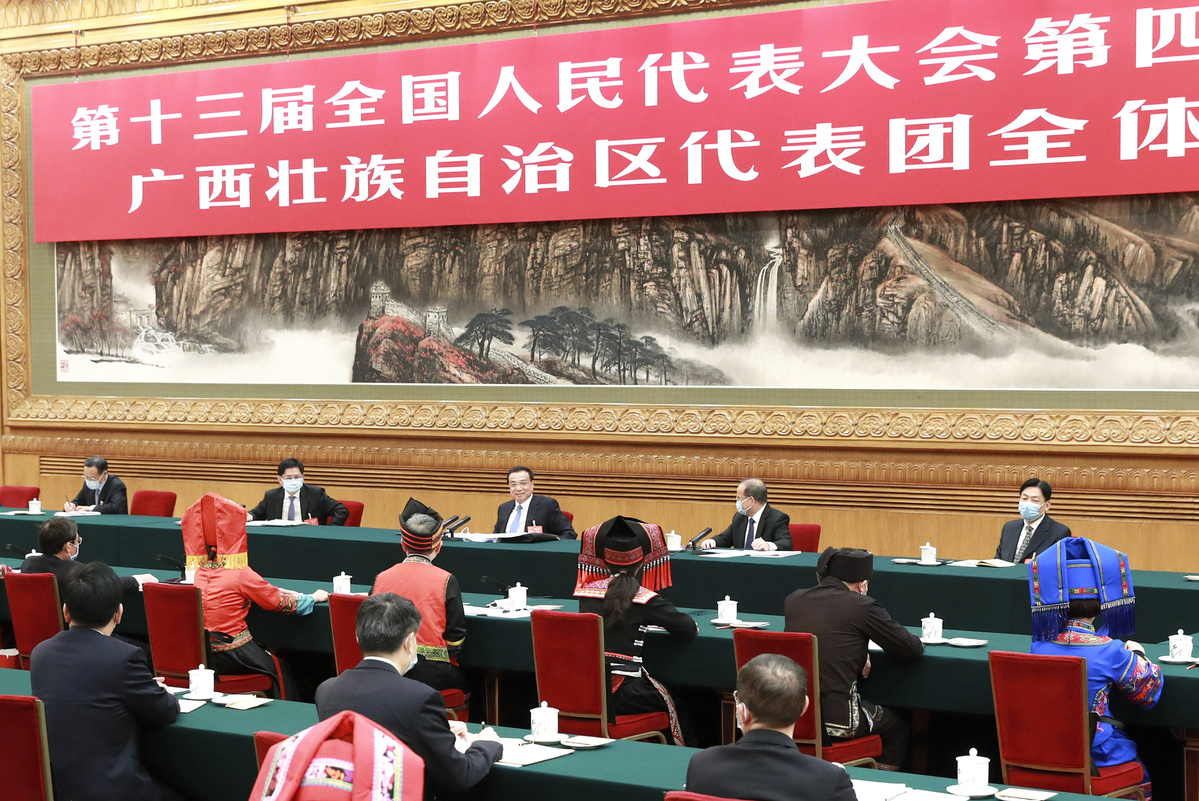 Premier Li Keqiang has underlined the importance of harnessing the foundation of China's manufacturing sector and strengthening new growth engines to create more jobs and unleash the potential of domestic demand.

Li's remarks came as he took part in a panel discussion in Beijing with National People's Congress deputies from the Guangxi Zhuang autonomous region on Saturday morning.

Guangxi elected Li as an NPC deputy for the region in 2018.

He also joined a group discussion with some members of the National Committee of the Chinese People's Political Consultative Conference.

The premier underscored that the country still faces a challenging domestic and external environment. He also highlighted the importance of coordinating efforts in COVID-19 containment and socioeconomic growth while implementing the new development philosophy and fostering a new development paradigm.

Li reiterated the need to ensure stability on six fronts, including employment, the financial sector, foreign trade and investment. And he called for maintaining security in six key areas, including basic living needs, market entities' operations, food and energy security, and stable industrial and supply chains.

He urged Guangxi's authorities to seize opportunities arising from major national strategies and the Regional Comprehensive Economic Partnership, and to improve its level of opening-up in coastal and border areas.

He called for steps to promote green development and uphold the principle that lucid waters and lush mountains are invaluable assets.

The region must scale up research and development in industries with local characteristics, boost their competitiveness and increase farmers' incomes, he said.

Li added that the country will accelerate steps to strengthen the weak links in education and healthcare in central and western regions, bolster support for rural areas and continuously improve the living standards of various ethnic groups. During the discussion with political advisers from the economic sector, Li reiterated the significance of pursuing high-quality development and maintaining macro policies' consistency, stability and sustainability. It is important to maintain economic performance within a reasonable range, avoid drastic fluctuations and stabilize market expectations, he said.

The premier also stressed the need to encourage businesses to boost their innovative capacities, spur the development of such emerging sectors as the digital economy, and steadily improve industry and supply chains.

He added that energy-saving and environmental-protection sectors must be further boosted to raise China's level of green and low-carbon development.

Li Zhanshu, Wang Yang, Wang Huning and Zhao Leji－members of the Standing Committee of the Political Bureau of the Communist Party of China Central Committee－also joined discussions with political advisers on Saturday. Vice-President Wang Qishan took part in a panel discussion with lawmakers from Hunan province on Saturday.