Deputies from Taiwan, Guizhou, Tianjin exhorted to maintain spirit of the CPC

Momentum for economic growth, including new industries such as the digital economy, should be accelerated, while traditional industries should be upgraded to promote higher-quality development in Zhejiang Province, Premier Li Keqiang said on Wednesday. 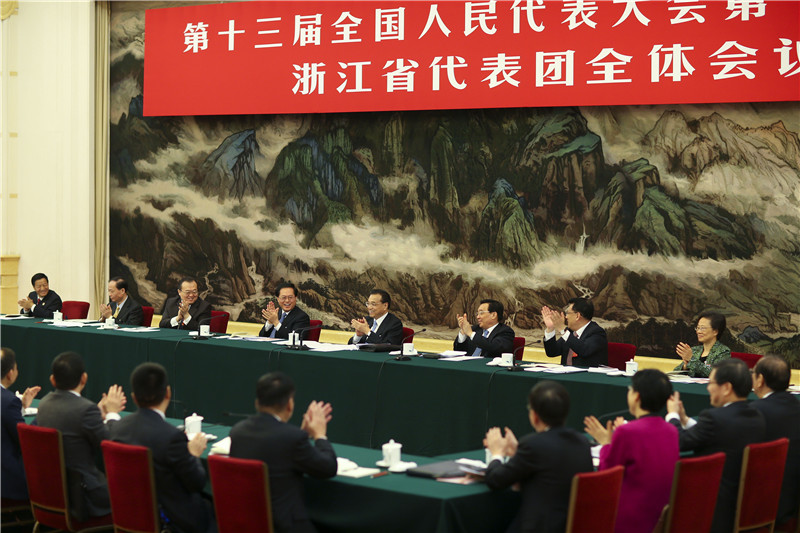 In the past five years, Zhejiang has made extraordinary achievements in reform, development and economic transformation, Li said during a panel discussion with National People's Congress deputies from the province.

Li said the province should unite around the Central Committee of the Communist Party of China, with General Secretary Xi Jinping at its core, to carry out its policies, together with the directives of the State Council, the country's Cabinet.

The premier also called for the transformation of government functions by strengthening the supervision to further stimulate market vitality and social creativity.

The private sector, and small and micro enterprises, should be supported by stronger efforts to upgrade entrepreneurship and innovation, which will help boost employment and improve people's livelihoods, Li said.

Yuan Jiajun, governor of Zhejiang, said the province's development method has changed fundamentally, with increases in the service sector and high-tech industries.

Zhejiang's investment in research and development increased by 11.8 percent annually in the past five years, Yuan said.

The province has more than 11,400 high-tech companies, more than double the number in 2013, he said.

Another five members of the Standing Committee of the Political Bureau of the CPC Central Committee－Li Zhanshu, Wang Yang, Wang Huning, Zhao Leji and Han Zheng－also joined the discussions on Wednesday.

Studying and implementing the spirit of the 19th CPC National Congress and Xi's thoughts on Taiwan affairs will be a primary task, Vice-Premier Wang Yang told deputies in the Taiwan delegation.

The one-China principle and the 1992 Consensus must be firmly upheld, with resolute opposition and deterrence of separatist activity advocating "Taiwan independence" in any form, Wang said.

Cross-Straits economic and cultural exchanges should be deepened, and equal opportunities will be provided to Taiwan people who live on the mainland, he said.

In discussions with deputies from Guizhou province, Wang Huning called for putting Xi Jinping Thought on Socialism with Chinese Characteristics for a New Era fully into practice to achieve high-quality development and accomplish the missions of targeted poverty alleviation, guarding against major risks and preventing and controlling pollution.

Han Zheng expressed appreciation for Tianjin's work during discussions with deputies from the city. He called on Tianjin to fully implement the spirit of Xi's instruction－given in 2013 during his inspection of the municipality－for concerted efforts to improve efficiency and quality in development, to improve people's livelihoods and to strengthen the Party's leadership.