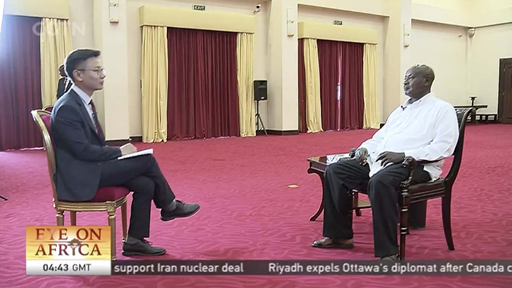 Ugandan President Yoweri Museveni has hailed his country’s relations with China, expressing his desire to continue working closely with the Asian nation to achieve development and progress on various aspects.

The two countries established diplomatic ties in the 1960s, and since then they have cooperated on trade, infrastructure and education among others.

China has been in charge of building many of Uganda’s public facilities, including the office of its Foreign Ministry, motorways and two hydropower projects.

"They have given us soft loans for building two dams – Karuma and Isimba. They have also given us the soft loans for the Entebbe expressway and for the international airport. We also use your own money to hire Chinese companies for doing road works upgrading. Besides, they have opened for us zero-tax rate without quota to the Chinese market for 440 products. We’re therefore very happy,” Museveni said in an exclusive interview with CGTN.

The president was speaking ahead of the Forum on China-Africa Cooperation (FOCAC), which will be hosted in Beijing in September.

He said he would root for more penetration of African products into the Chinese market, as well as the acquisition of loans and skills to aid Africa’s development.

The 2018 Summit will be held under the theme “China and Africa: Toward an Even Stronger Community with a Shared Future through Win-Win Cooperation.”