President Xi Jinping, who has been a farmer, can always make acquaintance with villagers in a short time.

Xi made comments like "We are the same age" and "you are my little brother" to villagers while visiting Northwest China's Ningxia Hui Autonomous Region on June 8 this year. 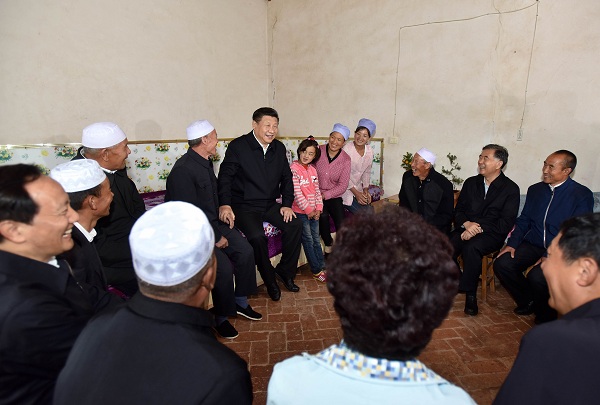 Four years ago when Xi visited Ningxia, he wanted to visit places with hard living conditions and take a look.

At the home of villager Ma Kejun, Xi sat on a kang, a northern China bed-stove made of clay or bricks, and called him "brother," leaving an unforgettable impression on Ma.

In November 2013, at Shibadong village of Hunan Province in Central China, Xi visited villager Shi Pazhuan, calling her "older sister" and introducing himself as "a servant of people".

In the same month, Xi visited veteran Wang Kechang in an old revolutionary base area of Shandong Province.

In Wang’s home, Xi asked how many hectares of land he had, how much money he earned weaving willows and what difficulties he still had.

Wang said his life has improved and he listened to Xi's speeches every day. “Please criticize and correct me,” said Xi sincerely.

The words "older brother," "older sister” and the sentence "Please criticize and correct me,” revealed much about Xi's connection with people.

During this year's two sessions, Xi stressed offering a helping hand to people, especially farmers. No one should be left behind on the road to common prosperity, Xi said.

Four years ago, Xi went to a mushroom greenhouse in Minning town of Ningxia and asked Wan Junhong, a planting expert with nearsightedness, "Where did the mushroom spawns come from? How much does a mushroom spawn cost?"

Wan said, "It can be seen that President Xi knows a lot about mushroom planting!" Juncao technology, or mushroom-grass technology, enabled Wan to rid himself of poverty and lead a better life.

Noticing Wan's thick eyeglasses, Xi asked him whether the glasses affected his work. Wan felt very moved at that time.

Now Wan has received surgery with help from the government and his eyesight has basically returned to normal. His spectacle lenses have also become thinner. “I never dreamed that I could see so clearly in my life!" Wan said.

Liu Cigui, secretary of the CPC Hainan Provincial Committee, recalled a meeting when he was mayor of Xiamen.

Liu went to Beijing to attend the two sessions where Xi asked him when he became mayor of Xiamen and how the Junying village, one of the most impoverished villages in the city, was doing.

Liu flushed with embarrassment. He hadn't been there and didn't expect Xi to have visited such remote areas during his three years in Xiamen. Liu was surprised Xi was still concerned about the village.

In the past few years, Xi has visited 14 contiguous poor areas in the country, and always greets his "older brothers" and "older sisters."