Chinese President Xi Jinping praised Solomon Islands' decision to establish diplomatic relations with the People's Republic of China (PRC), saying it conforms to the trend of the times. 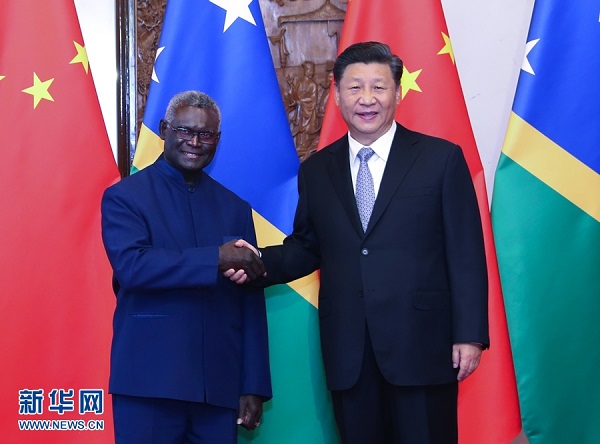 Xi made the remarks while meeting with the visiting Solomon Islands' Prime Minister Manasseh Sogavare on Wednesday at Diaoyutai State Guesthouse in Beijing.

The Solomon Islands established diplomatic ties with China on September 21 following a communique signed by the two countries' foreign ministers in the Chinese capital.

President Xi told Sogavare that there's no "early or late" in friendships and forming ties, adding that the move will do good to the people of both countries.

Calling Sogavare's visit a landmark, Xi said that China is willing to seize the historical opportunity for the establishment of diplomatic ties to open up a bright future for the development of bilateral ties.

Solomon Islands is located on the southern extension of the 21st Century Maritime Silk Road, the Chinese president pointed out and added the two sides should take the signing of the Memorandum of Understanding (MOU) on the Belt and Road Initiative (BRI) as an opportunity to dock development strategies and fully enhance cooperation.

After the establishment of diplomatic relations, Solomon Islands has become an outbound tourist destination for Chinese citizens, which brings great opportunities for personnel exchanges, local exchanges and tourism cooperation between the two countries, Xi said.

He also said that China welcomes the accession of the Solomon Islands to the family of cooperation between China and Pacific island nations and is willing to strengthen communication and cooperation under multilateral mechanisms to jointly address challenges such as climate change and safeguard the common interests of developing countries.

Sogavare for his part hailed China's great achievement over the past seven decades.

"It is our solemn and firm political commitment to recognize the one-China principle, establish diplomatic relations with the People's Republic of China and choose to stand on the right side of history and on the side of the overwhelming majority of countries in the world", he added.

At the meeting, the two leaders agreed to boost cooperation between the two countries in sectors such as tourism, investment and trade, infrastructure, and communications as well as agriculture, forestry and fisheries.

Sogavare is paying an official visit to China from Tuesday to Sunday. He will also attend the closing ceremony of the 2019 Beijing International Horticultural Exhibition on Wednesday.