Crab is not only a delicacy for Chinese people in autumn, but also a typical gift, especially since the Mid-Autumn Festival and the Chinese National Day (October 1) coincide with the crab's harvest season every year. 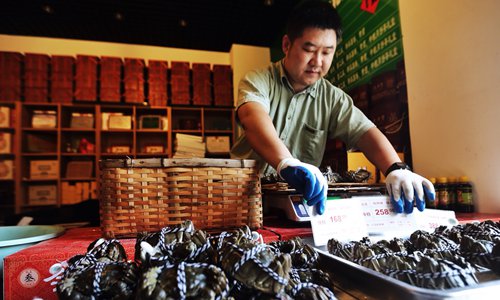 Hairy crab dealers introduced crab gift cards in China 10 years ago, because live hairy crabs are difficult to transport and preserve, The Beijing News reported "Scalping crab gift cards used to be an easy way to make money. Crab gift card recycling and reselling was booming before 2014, but now most crab products have become more accessible goods for the public rather than high-end gifts. This is because of the influence of the government's anti-bribery policies," a crab gift card scalper told The Beijing News.Inflated prices In China, the price of a single hairy crab can currently be as high as 360 yuan ($58), the Global Times found on a website selling hairy crabs from the Yangcheng Lake, China's famous home of hairy crabs.Ten years ago, driven by the overwhelming demand for hairy crabs as prestigious gifts for officials, dealers found that buying and selling crab gift cards was a sure bet to come out ahead, because officials received far too many cards and sold them for extra cash. However, the demand for crabs and crab gift cards has become lower every year since the graft and waste crackdown, starting about five years ago. The overall market for the gift cards has collapsed, and unwanted gift cards are being sold to the public at 60 percent of the face price. Some gift cards are even being dumped for just 10 or 20 percent of the face value, the Global Times confirmed by checking Taobao, China's leading e-commerce platform.Zhang Xixian, a professor at the Party School of the Central Committee of the Communist Party of China (CPC) in Beijing, told the Global Times that before the frugality rules were imposed, government officials of all levels would purchase large numbers of hairy crabs with government money before the Mid-Autumn Festival as gifts for their employees. "The end of the unhealthy tendency in recent years reflects the result of China's anti-corruption efforts," Zhang said.The revised 142-clause set of disciplinary regulations of the CPC published by the CPC Central Committee in August this year imposes strict punitive measures for government officials and CPC members giving or receiving gifts of great value such as gift cards, stock equity, vouchers and financial products.China's nationwide anti-corruption drive was launched at the 18th CPC National Congress at the end of 2012 as the Party released its eight-point rules to maintain frugal Party conduct. This led to the drop in demand for hairy crabs. Like the high priced hairy crab, moon cakes faced the same inflated prices before the frugality and anti-corruption regulations were imposed.A saleswoman surnamed Wang who works as a promoter with a well-known moon cake brand at a supermarket in Beijing told the Global Times that she had seen an obvious change in China's moon cake market. Luxuriously packaged moon cakes priced from 1,500 yuan to 1,600 yuan have disappeared, and fair prices have returned to the market in recent years.Frustrated 'gift-recycling' businessIn addition to crabs and moon cakes, other gifts that used to be given among government employees have also seen a drop in demand.An owner of a grocery store near a government agency in Beijing said that the "gift-recycling" business in his store has entered a lull since five years ago, around the time the government crackdown on waste and graft started. His grocery store runs a gift-recycling business, which collects typical gifts such as luxury Chinese liquor and cigarettes. The 20-square-meter store also pays cash for gift cards, another typical gift."Business used to be thriving at every festival, but these years business has seen a sharp decrease," said Zhang, adding that "Compared with four years ago when it [giving luxury gifts] was still a trend, the undesirable practice nowadays is barely seen." "Traffic would be jammed before and during the Mid-Autumn Festival, and these years traffic has become much better, with few cars on road compared with three or four years ago," Zhang Hua, a taxi driver in Beijing with 20 years of working experience, told the Global Times.The taxi driver said that he would be hired to deliver gifts to government officials during festivals four or five years ago. "I just ran one order in a single day, with a full load of boxes and bags from the same person going to a dozen destinations," said Zhang Hua. "Ever since the anti-corruption drive, I've never got an order like that because of the government's strict controls on bribery," added Zhang Hua.Zhang Xixian explained to the Global Times that China's anti-corruption campaign might strike certain existing businesses but it won't hurt the country's economic development. On the contrary, "The saved government budget has been injected to infrastructure construction and programs for people's welfare such as social and medical insurance."